This Assignment Is So Gay: LGBTIQ Poets on the Art of Teaching by Megan Volpert, ed. 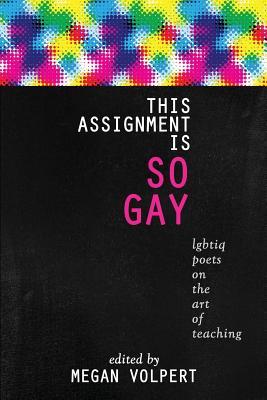 Had Plato been privy to This Assignment Is So Gay, he might have changed his proclamation that would banish poets from the city. This collection of LGBTIQ poetry does not disappoint from the first to the last page, offering up not only personal pedagogical anecdotes but also the most beautiful yet painful, heart-wrenchingly honest poetry I can recall reading in recent memory. Not only do the poems throughout this anthology challenge the act of bodily perception, they challenge the boundaries of identity itself by placing in question traditional perceptions of gender, sexuality, and the human body. How do we define corpus? Is a body political in nature? social? gendered? The poems in this body of work suggest that in all its various guises and forms, the body is a formidable—although fragmented—force to be reckoned with, despite various efforts to contain and define it.

The poems throughout this collection ask us to question the cultural, social, and historical presumptions and assumptions on which they are based by drawing out the differences involved between the production and determination of meaning, and this process of engagement always involves anxiety. But, as this anthology reminds us, that’s because there’s something to lose, something ultimately at stake. From the raw beauty of Nicholas Wong’s “Suicide Mission,” telling readers of the ways in which “language / [is] second-hand in outlining the loan of pain,” to Nina Pick’s likening of a poetic meter to that of a human heartbeat in “School of Embodied Poetics,” these poetic works serve as a beacon, a lighthouse of sorts, not just for the LGBTIQ community but for anyone who has ever been seen as “other.”

Several poems, such as Josephina Starmack’s “Earth Science” and Joseph Ross’s “Conversation After Class 1,” interrogate typical ways of viewing landscapes but also put the very definition of what it means to be “natural” in question by luring out an artful and untamed beauty that exists in nature but is perceived by others as unnatural. This camouflaged metaphor highlights subjectivity but also personifies the differences between seeing and being seen, as we find with Erin Northern’s “Diagnosis.”

Editor Megan Volpert’s introduction acknowledges that great strides have been made in helping young students come “out of the closet,” claiming that this book sets out to offer a space where people from all walks of life can interact on a human level and invest in what she terms “the ethics of caring.” Indeed, This Assignment Is So Gay not only meets the mark, it exceeds it, and by a very large measure. Despite current media bombardment that often numbs our senses and the tremendous weight of history that can make human agency feel like a futile endeavor, this book is driven by a desire to let each and every human being know that they can make a difference in society. How very refreshing, indeed—and, dare I say, necessary.