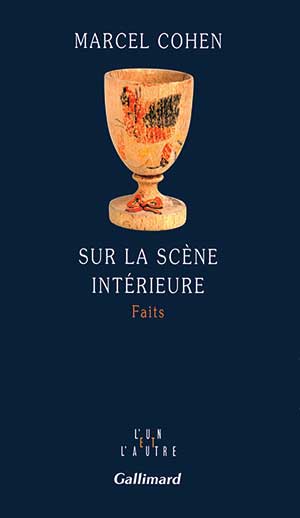 “A book whose center lies on the periphery, and which provides nothing to hold onto, would that be sheer nonsense?” asks Marcel Cohen in the first pages of his latest book. The latter consists of a series of portraits of the people whom Cohen lost in the Holocaust: his mother, his father, his infant sister, his paternal grandparents, two uncles, and a great-aunt. There are eight portraits in all. Some are fairly detailed; some, more slight.

The moment that each of them visits is seventy years in the past, at a time when Marcel Cohen himself was five years old, in Paris under the Occupation. The accounts that he offers here rely in large measure upon the testimony of others—for the most part, the members of his family who survived and who were willing to talk about the people who were murdered. Yet from time to time he also brings his own memories to bear, as distant and uncertain as those memories may be. His liminal question is thus not a rhetorical one, because his enterprise here is so tenuous and vexed by trauma, loss, historical scandal, and the fragility of meaning. The only thing of which Cohen is certain is that the project is, for him, absolutely imperative.

He meditates upon objects here, upon those few mundane things that his loved ones left behind: an eggcup, for instance, a cigarette case, a homemade stuffed dog, or a violin. The quiddity of those objects is reassuring when compared to the fragility of memory, whether his own memory or that of others; and they have more solidity than photographs, too. Yet they have no humanity, and any efforts to invest them with humanity will inevitably founder. The testimony that they provide is thus in a sense mute, pointing wordlessly toward a moment that was, a moment after which everything became very different than it had been. The way that moment persists, coloring everything in a “present” that ebbs ever further away from it, is one of the most striking features in this extraordinary, tersely eloquent, and deeply moving book.