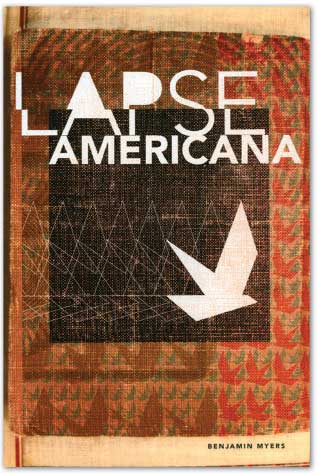 In reading Benjamin Myers’s second collection of poetry, one is struck with how frequently “neighbors” and “neighborhood” occur, sometimes specified as friends or family. The fact that Lincoln County and Chandler, Oklahoma, are sometimes named matters less than the individuals whose stories fill out the neighborhood Myers constructs. It’s a place within a larger place, the south-central Midwest, with its rolling topography, scrub oaks, and crops, down to the red clay.

But while dust, tornadoes, wildfire, cornstalks, the city dump, the county fair, and fence posts rear up, they become what people do with or in them, what people—or a poet of the people—make of them. One is reminded of the philosopher who argued that putting words to such things is the only way we can hold onto them. I would add “and create them for others,” which is what Myers’s poetry does. It seems natural that Myers’s acquaintance with Dante, Odin, Virgil, and other luminaries would gain entrance to the neighborhood, too, whether in the form of a Spook House, the action of memory, or a still-mourned father.

Unique is the consciousness of this poet. A liberal arts education certainly matters, but more the layered awareness that occurs when one leaves and then comes back to the place of one’s youth, summoning what and who is there and not there so as to hold them in the same poetic space. The poet is there, in community, and not there at the same time, even as a father. Not surprisingly, the most vivid passages are often tinged with mortality, the loss that has occurred or will occur: one is ever “The Man from the Colonies” or a jogger meeting another jogger in the graveyard.

Lapse Americana certainly affirms the circle of home and neighborhood first, then a larger environment in which “Americana” is a wavering abstraction. “Lapse” suggests a loss of strict adherence and a consciousness of what one is separated from—the connection remains. The political certitudes of others, popular culture (the Alamo), and wars may impinge and draw one out of the familiar circle, but they are less important than relationships with neighbors (“The City Dump”) or with the possibilities of your own life (“The Old Men”).

The richness of this volume, the “more than,” is certainly reflected in the coda, in which a lonely Pascal, here a time traveler, writes to an unresponsive beloved from different places, from a bustling nineteenth-century Paris to second-century Rome, to LA and back to France. While the letters are hardly in the neighborhood otherwise created, they are passages to presence and loss, remoteness and nearness always joined in Benjamin Myers’s poetry.