Twelve Views from the Distance by Mutsuo Takahashi 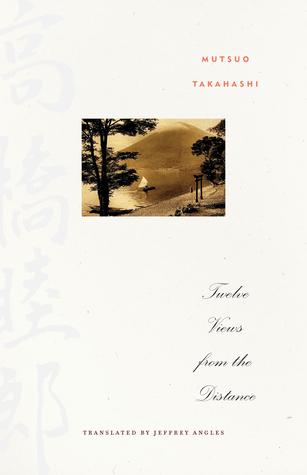 Mutsuo Takahashi is one of the most prominent contemporary Japanese poets to have thematized homoeroticism. This superb translation of Takahashi’s autobiography—nominated for the 2013 Lambda Literary Award—is an excellent companion to the poet’s other translated works such as Poems of a Penisist (1975).

Takahashi’s oeuvre ranges widely, traversing various genres from poetry to haiku, tanka to noh, and from Greek tragedies to fiction and the essay form. In his autobiography, he adopts a plainer prose style to narrate his family history, one that is filled with unhappy episodes. Yet for the reader, the sadness is somewhat mitigated because of Takahashi’s optics of the weak that looks at this worldly cruelty as if from another world.

Takahashi was born in 1937 in northern Kyushu, Japan’s gateway to the continent in the ongoing Sino-Japanese War. He lost his father when only three months old and was later separated from his mother, who went to work in China and became the lover of a Japanese business owner. When she returned after a year, she seemed a stranger to him. Thereafter, Takahashi tells us, his life was shaped by absence and separation. What allowed him to endure his solitude were the old songs and sometimes bloody tales that his grandmothers told him. The experience, he suggests, aided in the cultivation of his poetic imagination.

The environment in which Takahashi grew up was permeated by forms of violence, both public and private. His uncle died in a military hospital after being drafted and sent to Burma. And there was violence inside the home as well: the young Takahashi was often physically punished for no reason by his own mother and his relatives. Later he attended school, which he remembers as a time of coerced socialization; in the classroom, a caste system of princes and paupers existed, against which he occasionally rebelled.

However, it is precisely the father theme that distinguishes Mishima and Takahashi. If the former sought to compensate for the loss of the father as authority figure in postwar Japan through his radical nationalism, the latter seemed to embrace that very lack itself. In fact, Takahashi shows sympathy for his Korean neighbors who welcomed Japan’s defeat in 1945 as a liberation. At the end of the book, he presents a poem in which he promiscuously melts into the crowds, becomes anonymous, and is no longer present. This imagery affirms absence as such and represents a commentary on Takahashi’s politics.