Tiempo de ángeles / A Time of Angels by Homero Aridjis 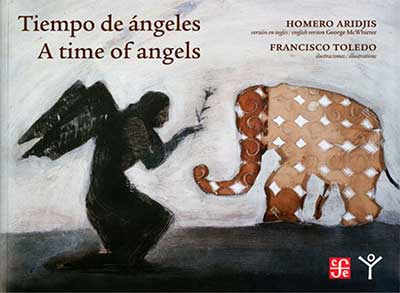 With its side-by-side bilingual presentation, accompanied by Francisco Toledo’s bold, whimsical, and evocative sketches and watercolors, Homero Aridjis’s Tiempo de ángeles creates a magical bestiary of forty-four poems about angels and of the consciousness of multiple selves and potential identities generated by an individual’s thought, desire, passion, and fear. These identities are created for a self, and for an entire culture, that may be viewed as endangered, both culturally and physically.

Indigenous and European traditions have blended in Mexico, resulting in a fascinating, multilayered culture that is filled with contradictions and unexpected resonances, all of which problematize reality. Indigenous productions show native animals such as jaguars and parrots with the ability to shift their shapes to reflect human nature and to impart valuable lessons to those able to observe them. So it is with the angels in Tiempo de ángeles and Toledo’s illustrations, which show angels in human and animalesque form.

Angels are particularly powerful within the context of Mexican cultural and artistic tradition. They remind one of the poetic tradition of Mixtec and Tzotzil (Mayan) speakers, whose art form takes the shape of spells and incantations, boldly asserting that language has power to impact the physical as well as spiritual realms. Much later, magical realism emerged, and Tiempo de ángeles shares characteristics of the best of that genre.

Christian angels of the Europeans were incorporated into Mexican beliefs, possibly because they reinforce the idea that the divine comes to earth and is able to assume human form because it has work to do: naming, guiding, comforting, disrupting, and awakening consciousness. They function as a “spirit intermediary” and are constant presences (as in “The Angel of Ubiquity”). However, they are not just companions and comforters but assure us that something exists beyond the empirical world we perceive with our senses.

Aridjis’s angels bring to light human qualities of mind and suggest mechanisms for how humans block their own self-awareness, often because an excess of knowledge is unbearable: “An angel who has seen its own double dies / because it turns into itself and its material / counterpart,” thus suggesting that the spiritual is truly endangered by too much contact with the material. Of course, the material is mortal, while the immortal, the angels, become important companions and cherishers of what is most intense in human experience: being born, falling in love, dying.