Time on My Hands by Giorgio Vasta 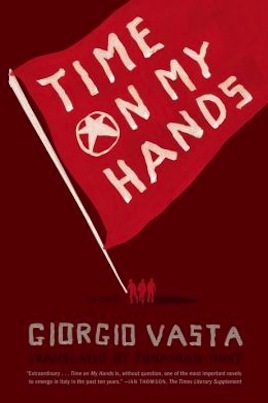 Giorgio Vasta’s Time on My Hands is a yearlong adventure in the footsteps of a young boy in Palermo, Sicily, whose life is dramatically twisted by love, camaraderie, and desire. While the rest of Italy is dealing with the most historically astonishing domestic terrorist attack on the state enacted by the Red Brigades (the kidnapping and subsequent murder of renowned politician Aldo Moro, in 1978), three eleven-year-old Sicilian students enamored with rhetoric and language (they invent an alphabet made up of foolish body signs, named “alphamute”) find themselves at odds with their surroundings and feel the urgency to take action. Realizing that their passion for language sets them apart, the trio—nicknamed Comrade Nimbus, Comrade Flight, and Comrade Radius—concocts increasingly violent plans in emulation of the national terrorists, and their descent into hell becomes unavoidable.

Through the voice of the narrator, Comrade Nimbus, the reader follows the escalation of their belligerence in opposition to the world outside of their tiny militant cell, belligerence that coalesces in the awareness that they are linguistically similar to the Red Brigades combatants: “they speak like us,” Scarmiglia (Comrade Flight) asserts. In a dismal and decaying urban environment, sick, dirty, or barely alive animals (flea-infested dogs, cats, pigeons) scattered hither and thither are the ultimate evidence of the social disaster affecting late 1970s Italy. The wounded animals both symbolize and embody the current tragic human condition, marked by violence, mutilation, apathy, and permanent disease. Without ideological goals to achieve (“the purpose of all this is defeat,” Flight states), their inane endeavor ends in infamy and betrayal.

Although carefully crafted, Vasta’s allegory of Italian terrorism as an immature, brutal, and purposeless undertaking, an outdated and ominously excessive rite of passage, is perhaps a portrayal less sophisticated than the reader would expect. Then again, the implausible middle-schoolboys’ catabasis does not ring completely untrue because of the aloofness between them and the adults: “Being eleven years old makes us invisible,” to quote once more the leader of the trio, Flight, while in the shadow their frustration exacerbates. Time on My Hands pits the visible apathy of the adults and the invisible anger of the boys against each other, producing a generational clash fought by means of violent actions and puzzled reactions, as incommunicability rules and splits.