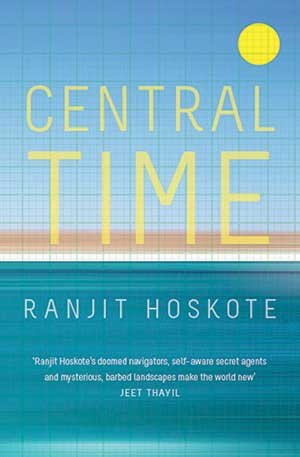 The title of Central Time is both an allusion to Ranjit Hoskote’s midlife output and to the obliquely central place of time in his work. This volume contains a hundred poems written between 2006 and 2014, and it offers a perfect sequel to his Vanishing Acts: New and Selected Poems, 1985–2005.

The anthology is divided into a quintet of enigmatically titled sections: “Zoetrope,” “The Pilot’s Almanac,” “Gravity Leaps to the Eye,” “The Existence Certificate,” and “The Institute of Silence”—each section, like a variation, containing movements that shift subtly in pitch and register.

Hoskote expands his formal space in this new book. I particularly like his explorations of the prose-poem form and poems that highlight the powerful sense of understated minimalism. “Incision,” dedicated to Lucio Fontana, is tightly wrought: “Cut quickly. There’s sky behind the flesh. / Prise up the fold. The atlas of the body is never complete.”

Hoskote acts as a sutradhar in his poems, a storyteller weaving in characters and landscapes as varied as Ovid, Ghalib, Bihzad, Magritte, Fujihata, Kaleka, Claudel, Brocan, Lannoy, Turner, Srinagar, Goa, Indore, Bombay, Berlin, Dortmund, Utrecht, Kabul, and many others.

There are beautifully touching verses to his beloved wife, Nancy: “Nazm” and “In the Margin of an Autumn Folio.” These two pieces are overtly for her, and there are others that feature her in an askance-veiled manner. These poems provide a strong emotional and lyrical underpinning to his otherwise largely educated and sophisticated tonality. Here are the first and last nazms from the eponymous poem quartet: “Our lives are voices in two heads. / The rest is background music.” “We lie embroidered on the mimosa. / I need no gauge of motives to tell me / why it has rained.”

Unsurprisingly, Hoskote’s engagement with the fine arts is supremely evident in many of his poems. There are direct and indirect allusions to poets, painters, and paintings washed with vital parenthetical details and hues contained in its palette. So you will find eulogies to Dom Moraes (“Conspiracies”), Adil Jussawalla (“Chimera”), and Charles Simic (“The Reading”); references to Bhupen Khakhar (“Painter Talking to Flowers”), Atul Dodiya (“The Guide Recalls the Mountains”), J. M. W. Turner (“The Landscapist’s Advice to His Apprentice”), and many more.

Central Time contains powerfully built poems that are at the same time clever, vulnerable, lyrical, stoical, intelligent, wise, and moving. Savor the irony in the opening gambit of the prose poem “For Example”: “The saint maintains his piety through the graphic imagination of other people’s vices. We thank him for it.”

Ultimately, Hoskote is wholeheartedly a Mumbaiah, a Bombay poet deeply rooted in its ethos. The poem “Tidemark” bears all the watermarks of this: “Water draws a line around the things we loved. / I pluck dead birds from the wash and burn their feathers. // This is where I belong, in tidal water / drawn up over my feet like a shell blanket. // I hate this city on the sea, but I will die here.”