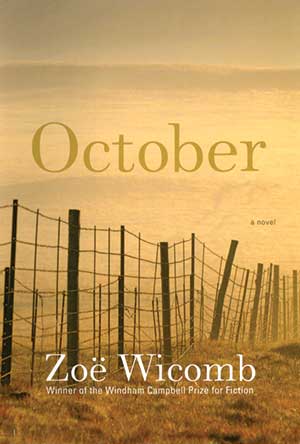 Mercia Murray has been abandoned. Disposed of and dumped by her lover of twenty-four years. She attempts to make sense of a senseless act. After almost a quarter of a century living in Scotland, most of it with Craig, she looks back at her experiences in an attempt to understand them. She is herself a transplant from South Africa—a South Africa she abandoned, disposed of, and dumped in an earlier life. At fifty-two she is called back to South Africa by a letter from her alcoholic brother, Jake. Trying to quiet her broken heart and her dislocated psyche, she goes, only to find herself straddling two worlds and two existences.

October is a straightforward depiction of the multifarious elements in Mercia’s constrained and constrictive life. Although she has been separated from her roots for twenty-five years, supposedly living a “better” life in Scotland, she is haunted by those roots, which begin to reappear, unearthed by the unexpected termination of her relationship with Craig and then the dysfunctional relationship with her brother. She discovers characteristics she had been unaware of in herself and the dark secret of the precedence of her sister-in-law’s son.

Zoë Wicomb presents the reader with a contemporary issue—the midlife crisis. In this novel, it is a woman who goes through the crisis, yet it is the behavior of a man, Craig, who precipitates her awakening. Craig, who swore he did not want children, has abandoned Mercia to set up house with a younger woman whom he has impregnated. In South Africa, Mercia, who never wanted children either, is confronted with her brother’s supposed son, Nicky, aged five, and realizes she may have to be responsible for him since his “father,” an alcoholic, is unable to care for him.

Mercia’s unraveling world is not only presented at the superficial level of her broken romance but also at the professional level as she gradually realizes how tenuous and fragile that focus has become. The jolt of Craig’s abandonment has tilted her perspective in every direction, and she is unable to find anything sufficiently worthwhile to grab hold of and stabilize herself. She is in a serious quandary—a quandary with which the reader can identify, especially if the reader is over fifty and has either experienced personally, or vicariously, a similar meltdown.

Although the initial thematic of the novel—the abandonment—is universal, it is the skillfully crafted internal dialogue juxtaposed with the ever-present reality of the divergent facts of Mercia’s lives in Scotland and South Africa that draw the reader. The slow realization of the frailty of the human character as personified in her autocratic and somewhat abusive father—revealed through a series of flashbacks—offers a further level of realization in Mercia’s series of epiphanies. As she sloughs off her skins of memories, she slowly begins to accept her own guilt in the events that are depicted throughout October. She moves from being a victim to accepting her role as victimizer, from abused to abuser, from manipulated to manipulator, and from abandoned to abandoner. This realization is her coming-of-age as a woman, and it allows her to move beyond her midlife crisis.

October is a clever novel, well written with identifiable characters, recognizable plotlines, and an open-ended conclusion. Wicomb offers an intriguing look at what sometimes happens to people in the twilight of their lives.