The Box and the Briefcase, the Moleque and the Old Man and the First Coming of the Second Son of God by John M. Keller 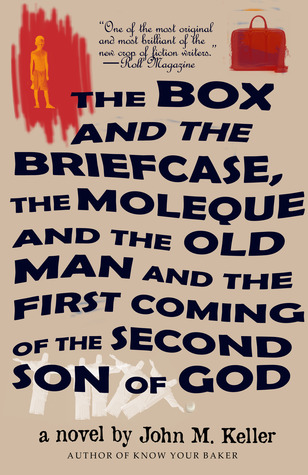 John M. Keller’s The Box and the Briefcase, the Moleque and the Old Man and the First Coming of the Second Son of God is the latest in a long line of works of speculative fiction to use a plot structure familiar to most people from Plato’s “Allegory of the Cave.” In Keller’s third novel, three separate storylines eventually come together to tell the story of a journey from illusion to reality. The first thread follows Sylmara, a young actress who lives in an exclusive, gated community in Brazil of the near-future called Beverly Hills, which is “like America as viewed by so many countries all over the world in the twentieth century—that America that everyone wanted to emigrate to and that most would have given their lives to enter.” As she begins to doubt the reality of her world, she escapes, although she cannot return and has been told all her life that she will be killed out there in “Embora.” Like Plato’s seeker who discovers the sun outside his cave, Fahrenheit 451’s Guy Montag, who discovers a world of meaning in books it is his job to burn, or Logan’s Run’s Logan-6, who discovers sanctuary in Sanctuary, Sylmara finds the real world.

Keller imagines a world in which plastic surgery is as de rigueur as cosmetics, a device familiar to fans of the Terry Gilliam film Brazil. The faces and bodies of the beautiful people who live in Beverly Hills are for sale at Restoration Centers in the rest of Brazil, where they are highly sought after because the inhabitants of Beverly Hills star in all the soap operas and films that the rest of Brazil sees.

The novel’s second thread involves Edmond Foreman, a twentieth-century tuba player from Shreveport, Louisiana, who journeys through life reinventing himself; its third thread follows Jucélia Santos, a television producer who has moved her young son from the rougher Rio neighborhood of Lapa to the gentrified Leblon. The novel waits until the final act to reveal how the three threads intersect. The payoff has to be good to justify this technique, which can leave readers feeling frustrated in the early and middle sections of the book as seemingly unrelated characters trade chapters. Fortunately, Keller’s novel delivers, and from the moment the threads begin to come together, the book becomes quite a page-turner.

Like Ray Bradbury, who took the budding culture of media dependency and projected it to its extreme in Fahrenheit 451—a world where books are burned by “firemen” and houses have televisions that cover an entire wall—Keller takes our current-day media obsession with physical perfection and projects a near-future in which these tendencies have reached their logical, dreadful extreme.

The novel’s dystopian concepts are intriguing and as easy to imagine as wall-sized TV screens must have been when Bradbury published Fahrenheit 451 in 1953, and the vivid, concrete world of Brazil, from its beaches to its favelas, lends a solidity and vividness to the novel’s high-concept concerns. But what makes the story compelling is the story that unfolds when the three storylines intersect.