At Night We Walk in Circles by Daniel Alarcón 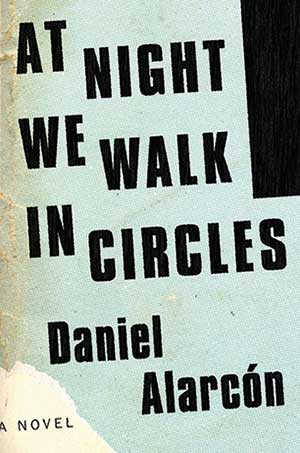 In 2008 the New Yorker published “The Idiot President,” a story unpublished in English that, according to Daniel Alarcón, had as a source the theater group Setiembre, active in Peru in the 1980s. Alarcón announced that the Spanish edition of El rey siempre está por encima del pueblo included a translation of the Setiembre tale.

It is worth keeping that transaction in mind, because At Night We Walk in Circles, which outside Spanish America has had a lukewarm reception, is really a tediously expanded version of that story and because the literary and commercial strategies of the Peruvian-born author are geared toward the circulation of his work in English. As a response to its time and as part of a conversation that world literatures have with those written north and south of the Rio Grande, this is precisely where Alarcón’s work and especially this novel collapse.

At Night We Walk in Circles recounts the history of the persecuted theater collective Diciembre and its reunion, years later, to present its iconic work, “The Idiot President.” Meanwhile, the novel also tells the story of Nelson, a young man from the capital with a conflicted love life who is cast as the play’s protagonist and whose brother left for the United States some time ago. Nelson accompanies Henry Nuñez, a shy, hypersensitive, and failed theatrical hero freed after being jailed for writing and putting on the play in question. Patalarga, a close friend of Henry’s and tireless promoter of “The Idiot President,” is the novel’s most relevant character: unpredictable, loyal, and enterprising, he excels in being so tangible, almost real.

The narrator, at times omniscient, seems to occasionally whisper secrets so that readers can understand the novel, which toward the end serves to weaken the novel’s structure and render its omniscience irrelevant. It is safe to assume that two earlier writing traditions underlie Alarcón’s work: ethnographic journalism (United States) and political pedagogy (Latin America), which, given his biographical trajectory, are perfectly plausible. Both writing fashions cross one another, disrupting flow, and in the best moments function as fortunate forces that become a heritage for interpretation.

In At Night We Walk in Circles, that junction rarely comes to fruition, particularly when Henry’s ulterior motive for the revival is intertwined with the memories of his cell mate and lover, Rogelio. Rewarding Alarcón for presenting Peru’s recent history ethnographically and pedagogically says more about the awarding institutions that legitimate his work than about the real space it occupies within the greater achievements of Latin American or United States literatures.

Ultimately, this novel does not sparkle on its own merits, but it does bring to the fore the problem of simultaneity in literature: a text that appears to discover Peru with amazement and compassion, almost with the innocence of early anthropology, written as if other Peruvian writers like Arguedas, Vargas Llosa, Thays, and others had not started or surpassed different traditions. At best, At Night We Walk in Circles is an instructive lesson about Peru during the last twenty years; at worst, it is a novel of intolerable naïveté and didacticism.