From the Extinct Volcano, a Bird of Paradise by Carter Revard 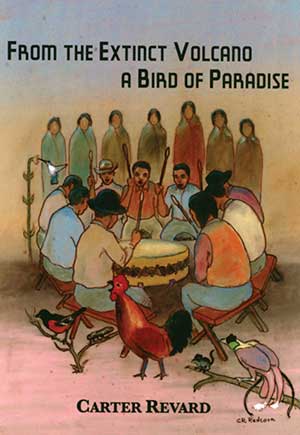 The author’s note at the beginning of From the Extinct Volcano, a Bird of Paradise—a new collection of poetry from Oklahoma writer and Osage poet Carter Revard—brings together multiple genres of writing into a single collection of poetry. For example, Revard sees his work as poetry that is composed of history, science, personal narrative, and song. The collection could be seen as a compilation of songs that serve as a greatest hits album. Many of the poems in the volume appear in earlier collections of Revard’s work. More compellingly, however, this volume of poetry represents a lyrical echo. The strongest moments in the collection are those of borrowing and repetition wherein Revard uses words and rhythms from the past to create contemporary art.

Revard’s poems “Driving in Oklahoma” and “A Song That We Still Sing” ask readers to consider how ordinary drives and ceremonial practices might be tied together. Both contain elements of repetition in which animals, spiritual practice, and relationship to the land reoccur over and over in different contexts. If readers are attuned to the return of certain beings and sounds, they might be able to connect literary and tribal histories to daily occurrences in ways that they had not expected. When Revard grounds his work in the histories and lands around Oklahoma, his poetry is resonant and useful for drawing connections between phases of time—such as the past and present—that might not be as distinct as many readers think.

The echoes across forms and time do not always work. For instance, Revard pays homage to poems as a number of historical and literary texts. In his attempts to pay homage to everyone from Milton to Shelley, Revard might alienate readers who are not interested in following the trail of references he lays out as he leads his audience through each poem.

Ultimately, Revard’s latest collection will appeal to students and teachers of American Indian studies, American history, and poetics. Readers who enjoy American and British literary history should consider adding this text to their personal library. Those who are familiar with Revard will probably enjoy rereading many of these poems as they discover new ones. Those who are hearing his songs and stories for the first time will likely be inspired to listen closely to what he has to say as they follow the echoes of others’ voices, echoes that inspire the songs he keeps alive.