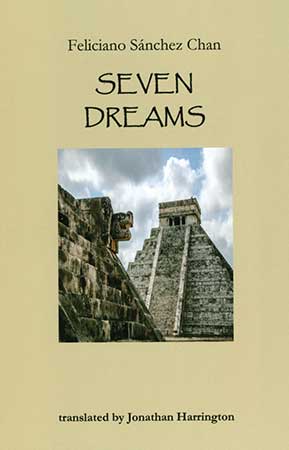 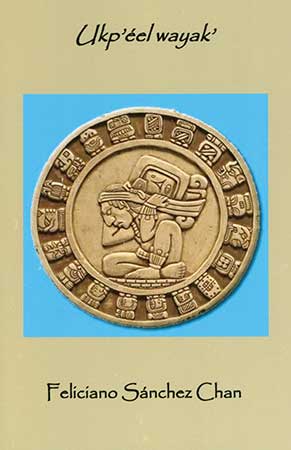 Like his Isthmus Zapotec contemporaries Victor Terán and Irma Pineda, Yucatec Maya poet Feliciano Sánchez Chan primarily writes contemporary pastoral love lyrics, but often incorporating significantly more traditional mythology than those poets, like Ruperta Bautista, who works in Tsotsil, or Juan Hernández, whose Huasteca Nahuatl poems recount the mythology of corn. In that blending, Sánchez Chan’s poetry is an important bridge between two dominant lyric modes of his generation of indigenous Mexican poets. The book’s title chapter, “Seven Dreams,” is much more focused on Mayan mythology than the latter two chapters, which ground their references to mythology in the contemporary indigenous experience. The latter two contain Sánchez Chan’s strongest poems, with powerful images such as his “village is an old man / squatting on his heels / beneath the shade of Mother Ceiba,” and his dream “took off its shoes / by the side of the road / and painted its face / with your footprints.”

Harrington, who has lived in the Yucatan since 1984, has translated these poems from Sánchez Chan’s own translation into Spanish, a necessity given the dearth of poet-translators fluent in Yucatec Maya. While some contemporary indigenous poets write between languages, just as they speak in everyday life, those that don’t—that is, that are Mayan-first poets like Sánchez Chan—often lack the skill required to render their poetry into a Spanish product of equal quality. The poetry shines through, but without the vivacity of the original; the orality of the poem often suffers, and the language tends to lapse into the faux baroque. The same might be true of any poet translating into their secondary language. My only critique of Harrington’s translations is that they too strongly reflect Spanish-language syntax, especially the use of nested prepositions rather than the much more fluid English possessive. Harrington has endeavored, he writes in his introduction, to use “a minimum of footnotes,” and I appreciate his employing only the occasional asterisk.

The publication of Seven Dreams, the first-ever bilingual single-author collection of contemporary Mayan poetry, is an important milestone in the recognition of its poetry both abroad and within Mexico, where indigenous poetry is mostly considered disconnected from the dominant concerns of mainstream Spanish-language poetry.