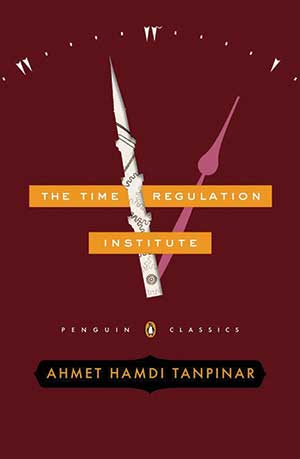 “The privilege I most treasured as a child was that of freedom,” says Hayri İrdal in The Time Regulation Institute, recalling the days when he was poor but happy, living in the capital of what was still the Ottoman Empire. But, he continues, “My life’s rhythms were disrupted, it would seem, by the watch my uncle gave me on the occasion of my circumcision.”

Ahmet Hamdi Tanpınar’s great Turkish novel, published in 1962 and finally translated into English this year, is the story of İrdal’s rise from watch tinkerer to deputy director of a sprawling government agency. Whiling away another night in the coffeehouse, İrdal meets a charismatic and well-connected official named Halit Ayarcı. The official is impressed with İrdal’s knowledge of timepieces and hires him into a new organization with a large budget and vague mission. Literally, its name is the Clock Setting Institute (Saatleri Ayarlama Enstitüsü), but all it seems to do is promote itself, employ Ayarcı’s friends, and fine the residents of Istanbul if their watches are fast or slow.

Ayarcı is a conceited executive who craves a sidekick, while İrdal, by his own account, is a man “who laughed when told to laugh, cried when told to cry, spoke when told to speak, wept when told to weep.” Naturally, they develop a mentor-mentee relationship, and Tanpınar uses Ayarcı’s lectures to deliver a pitch-perfect satire of Western pragmatism: “Being a realist does not mean seeing the truth for what it is,” preaches Ayarcı. “It is a question of determining our relationship with the truth in the way that is most beneficial for us.” He believes that numbers are deceptive and bar graphs should be drawn out of inspiration, not data; that employees should come up with work based on their titles; that purposes should be set up for institutes, and not the other way around. When İrdal complains about a talentless baldız (sister-in-law) who wants to sing, Ayarcı insists that they can make her a star; instead of starting with “the abstract concept of music,” İrdal should create a market by lowering people’s standards. See it this way, says Ayarcı: “My baldız wants nothing but to be a successful musician. So I have two factors: my baldız and music. As the first factor cannot be changed, I have no choice but to change the second.”

İrdal is grateful for his new wealth and prestige but uneasy with the way his mentor “played with life as if he were playing with a toy he’d picked up somewhere.” Presumably, Tanpınar felt a similar ambivalence toward the top-down program of modernization carried out by the Turkish Republic in the middle of the twentieth century. The Time Regulation Institute may be an allegory for this particular episode of history, but the quest to make sense of modernity—or reveal its absurdity—is an international cause as old as the novel itself, and a cause that Tanpınar has brilliantly advanced.