Fragments of Riversong by Farah Ghuznavi 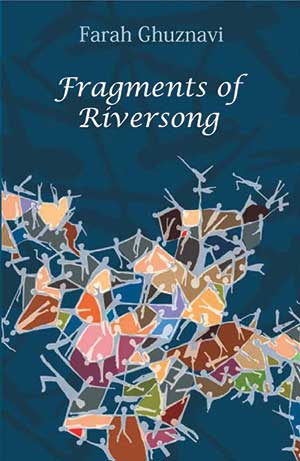 Explicitly aware of Farah Ghuznavi’s famed pedigree and background as a development consultant for over two decades with the nongovernmental sector, I wondered into what dangerous and domineering depths her short narrative prose might plunge. Contrarily, Ghuznavi ardently and forthrightly etches beyond and beneath the surfaces of South Asia’s most treacherous social issues. Several of the pieces of short fiction in Fragments of Riversong are narrated firsthand from the unrehearsed and inimitable perspective of young adults, adolescents, and children who spontaneously unearth experiences of caste, class, inequality, and poverty in the subcontinent of Bangladesh amid its rural and urban spheres.

The collection opens with “Getting There,” taking place during an unsettling car journey from the coastal city of Chittagong to the capital city, Dhaka. As Laila, a young architect, accompanies her nieces, fourteen-year-old Yasmin and six-year-old Aliya, to Dhaka following a family tragedy, Laila reminiscences about her stifling childhood and the tensions of being raised amid submissive wives, mothers, and sisters in a patriarchal society. “Old Delhi, New Tricks” is a witty and crisp tale about the encounters of Katy, an Englishwoman, and Shilpa, a Bangladeshi who has been away in England, on holiday together in the Indian capital of New Delhi. The narrator struggles with newfound vegetarianism and the old tongue of Hindi, exerting herself to feel at home amid the local crowd, plainly to realize that not only is she a migrant between the borders of London/Delhi and Dhaka but also a migrant within the borders of her own country and in between its convoluted stratifications.

“Big Mother” is a personal favorite, a complex and layered tale of young Lali, the unwanted stepdaughter of a polygamous marriage who finds her way from rural Bangladesh to the precarious shop floors of a garment factory in Dhaka and ultimately to uncertainty in North America. In “Just One of the Gang,” two teenage Bangladeshi American girls awkwardly soak in their newfound awareness of social class in an all-girls private high school in suburbia. “Waiting” is a gut-wrenching account of eleven-year-old Hashem and his little sister’s gastronomical cravings and childhood aspirations as they tug their impoverished way through the Muslim fasting period of Ramadan.

Ghuznavi’s self-taught literary style is devoid of complex literary jargon or unwanted references to popular culture. She lays out the text neatly and cleanly and in swift strokes. Her short fiction in both matter and style resembles the tender stories of legendary Indian novelist Anita Desai. Ghuznavi is undoubtedly a master of contrasting a character’s circumstances of gender, class, religion, linguistic background, and ethnicity in order to inform her readers of the deepening divides and fractured lives in the developing world. Fragments of Riversong is a critical and creative culmination of Farah Ghuznavi’s journalistic passage for over a decade.