Durians Are Not the Only Fruit by Wong Yoon Wah 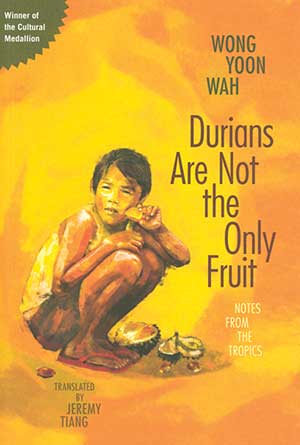 Durians Are Not the Only Fruit is a delightfully atypical publication to find in English. A well-read person will be expected to be aware of the richness of English, French, or Spanish literatures, yet even many devotees of world literature are unaware of the geographic scope of Chinese-language literature. In fact, in Singapore or Malaysia, such works are a major constituent of the national literature and often (as in Wong’s case) form an important category of postcolonial discourse. Moreover, Durians is a selection of literary essays—one of the principal genres of Chinese-language literature, but appearing in English translation less often than novels, short stories, or poetry. Jeremy Tiang smoothly renders Wong’s musings and reminiscences, whetting the appetite for the translator’s own writing.

The Chinese of Southeast Asian were transnational avant la lettre: Wong’s themes and biography underscore the variety of ethnic Chinese experiences outside of the PRC. Born in 1941 into a rubber-tapping village of colonial Malaya, he moved to Singapore in 1972 and presently resides in Taiwan. Although this publication is part of Epigram’s Cultural Medallion series and sponsored by Singapore’s National Arts Council, Wong’s most compelling essays deal with his reminiscences of Malaya during the Emergency (1948–60) and were published over the last thirty years in Taiwan. A translator of Camus’s L’Étranger, Wong is acutely aware that he is constantly writing about the unrecoverable, alien, and foreign past.

There are a few hiccups. The strange echo of the title (for it certainly has nothing to do with Oranges Are Not the Only Fruit) is likely to confuse the Western reader, nor does it point to any such phrase in the text. Also, at times unavoidably, Chinese allusiveness takes over—the names of fourteen Chinese authors, none of them well known to the English reader, appear on the first essay’s opening page. Instead, it is the engaging natural and period details of his youth that furnish the best moments—rubber trees, imported from Brazil, the only plant to turn yellow and lose its leaves in the Malayan tropics; or a vignette where a juvenile Wong raids untended rambutan trees because British colonial officials have removed the owners (who might be sympathetic to the Communist guerrillas). Such moments generate the sense of a complete universe, where previously the Emergency might have been only an abstraction for the reader.

The most poignant essay, “Cast from Paradise,” details how Wong, now an aging urbanite, is paralyzed by fear at spending a night in the same jungle environment in which he was born. But while Wong is chronicling his expulsion from the world of his youth, this volume sets that same world as a monument.