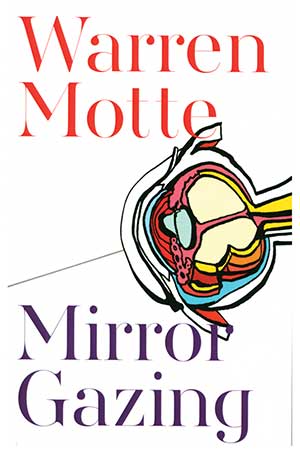 What do we see when we read? For Warren Motte, the question is more properly stated, what do we see reflected when we read? This is a book first and foremost about the literature of self-regard. Over the course of his career as a decorated scholar of French and comparative literature, Motte has amassed a collection of over ten thousand scenes in which mirrors play some kind of role in the plot of a story. Mirrors are where we see people seeing themselves and, presumably, where we as readers are made aware of the way we see ourselves. Mirrors are stand-ins for the narcissism of reading. “We read,” writes Motte, “but we also watch ourselves read. In doing so, we construct a version of ourselves.” As Witold Gombrowicz writes in his autobiography, celebrating great readers everywhere: “Monday / Me. / Tuesday / Me. / Wednesday / Me. / Thursday / Me.”

Following Motte provides all the pleasures of following in the footsteps of a great reader. The trail meanders, but the vistas are always rewarding. Mirrors suddenly become newly fascinating (“mirror, mirror on the wall . . .”), and you won’t read about one the same way again. Mirrors are sites of banality, like learning how to shave well (Salinger, Franny and Zooey), but they are also sites of inspiration: “Art should be like that mirror / Which reveals to us our own face” (Borges, “Ars Poetica”). They allow us to try on new selves (Hemingway, A Farewell to Arms) or feel the pangs of conscience (T. C. Boyle, A Friend of the Earth). They can be reminders of time passing or intense moments of self-love: “Cornell buttoned his blazer, turned sideways to the dresser mirror to look at himself. ‘You a lean, handsome motherfucker, ain’t you?’” (Elmore Leonard, Stick). Mirror scenes can be straightforward (“‘I’m me,’ she whispered. ‘Me.’” (Toni Morrison, Sula), or they can be complex enunciations of the not-quite of resemblance. “The mirror showed her someone who was so nearly her that she had to lean forward to see what was missing from her face” (Robert Wilson, The Company of Strangers). In the end, as Motte ably shows, no two mirror images are alike. The hall of mirrors extends to infinity.

Motte has built an impressive array of examples, which he admirably tries to tame into a system of types. And yet the joy of this book is in its contradictions, not its resolutions. Mirrors are places of estrangement and self-knowledge, boring and intense, magical and mundane. They are themselves always double. One of the most poignant things about mirrors, as Motte notes, is that even as you see yourself, you can never see your back. Our need for self-reflection is endless because never quite complete.