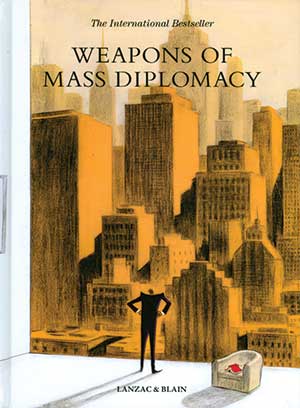 Weapons of Mass Diplomacy demonstrates indisputably that a graphic novel can provide great opportunities for trenchant commentary on public affairs. Abel Lanzac, the pseudonym of the very real French diplomat Antonin Baudry, deftly skewers all sides in this hilarious and biting take on the events leading up to the Iraq War. No one, not the Americans nor the French nor the fictional Middle Eastern Khemedi, is spared in this sharp tale.

It all begins with a young Arthur Vlaminck being summoned to the Quai d’Orsay to become a speechwriter for Alexandre Taillard de Vorms, the French foreign minister and a stand-in for Dominique de Villepin. Arthur is drawn with a very similar Gallic nose to that of the minister, and, in their first face-off—where Arthur says almost nothing and the minister does all the talking—their similarities are strikingly illustrated. After all, Arthur will become the source of everything that comes out of de Vorms’s mouth.

Once de Vorms gives Arthur the job, the devastating satire toward the workings of the department begins. Underlings jockey for position with the minister, and each defends his or her right to be the last word on the Middle East or Africa or the US. Little thought is given to the larger picture when these advisors indulge their internal struggles for power and notice. The one noble character, drawn with less caricatured style, is the chief of staff, Claude Maupas, seemingly the only sane head at the Quai d’Orsay. His biggest job is keeping the voluble and not always clearheaded minister out of trouble.

Arthur, as the writer, is the perfect lens through which to view the minister’s double-speak, his inability to resist a rhetorical phrase that says nothing, and his penchant for quoting such sages as Heraclitus, Marx, Rousseau, and Voltaire out of context and to sidesplitting effect. De Vorms is also unable to tone down his colossal ego, even when vying with the American secretary of state, a very familiar African American here named Jeffrey Cole. Of course, there is no disguise, not even a name change, when we see President Bush take the stage.

You don’t have to be a fan of the contemporary satirist Armando Ianucci or his American TV program Veep to appreciate the ways in which Lanzac and his perfect illustrator, Christophe Blain, lampoon ridiculous and familiar characters. But Weapons of Mass Diplomacy has an even sharper sting than these contemporary counterparts. Lanzac and Blain bring to mind Jonathan Swift and Alexander Pope. Their characters’ vanities and foibles underscore just how dangerous and at times foolish are the people to whom we entrust not only our well-being but our future.