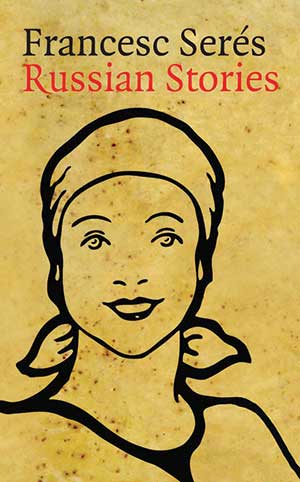 Russian Stories is a collection of twenty-one short stories supposedly written by authors who, according to Francesc Serés, “are some of the best-known writers of contemporary literature today.” Certainly the journey these tales have taken—from Russian to Catalan (translated by Anastasia Maximova, a figment of Serés’s imagination or of his devilish wit), from Catalan to English (translated by Peter Bush, who appears to be a “real” person), to this edited anthology—represents many of the actual tales themselves, which narrate the journeys taken by the Russian characters depicted within them. In a 2011 interview with Marta Rebón, Serés stated: “Pensé siempre en mí, cuando escribía los cuentos” (I only thought about myself when I was writing the stories), which appears to point to Serés as the author of the Catalan stories later translated by Bush. The reasons for his deception are not, however, clear.

In the twenty-one stories, the author(s) express the belief that all human beings are alike, no matter where we come from nor where our journeys take us. I have to agree with him. This short-story anthology differs in the “strangeness” of the characters’ names and loci but not in the nature of their interchangeable lives.

The anthology is organized from the most recent writings backward to earlier ones from the invented Ola Yevgueniyeva, fictitiously born as recently as 1967, to the equally nonexistent Jossef Bergchenko, whose fictitious date of birth is 1891. Whatever the reasons for Serés’s playful invention (if that is what it is), no one, not even the publisher, appears to know: “To be honest I’m not entirely sure who wrote these stories—was it Francesc Serés himself, or are they really the work of five forgotten or neglected Russian writers? It’s a testament to how good the writing is that I can’t really tell.” The material covered in the stories varies according to the political and social conditions extant in the various authors’ experiences as they wrote throughout the twentieth century.

Ostensibly written both before and after the inception of communism in Russia, the stories run the gamut. Some reflect the absence of resources and the differences in lifestyle experienced by Russians, the mind-boggling boredom of bureaucratic work with the state agencies. Others narrate the angst of young lovers unable to marry because of social inequality. Others describe more desperate situations such as old people returning to their contaminated village near Chernobyl, the destruction of an entire village by the plague, and allusions to the Cold War communist sleeper cells in Omaha. Yet others deal with the exile of a group of intellectuals to various far-flung parts of Russia, while still another narrates the desperate situation of a cosmonaut stranded in space when his vessel breaks down with no possibility of rescue.

Although the actual identity of the Russian authors (and, for that matter, the Russian-Catalan translator) is left in the air, this anthology gives the reader something of an open-window view of how Russian society has evolved, allowing the non-Russophile to better understand events and Russians in their journey through the twentieth century. Fascinating in their own right, the short stories serve to enhance the differences among peoples’ experiences while, at the same time, highlighting the similarities inherent in the characters and their readers—all united as members of the human race.

In the end, it really does not matter if Francesc Serés wrote them or not: they all communicate a history of one sector of our global society—Russia—and as such they are worthy of our attention while providing two hours of entertaining reading.