Ruby: A Novel by Cynthia Bond 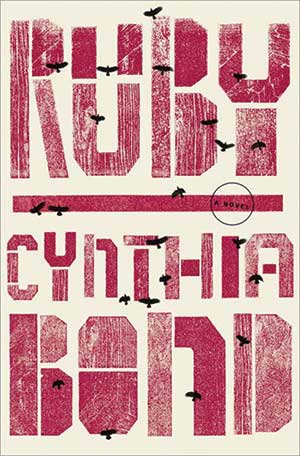 Ruby is a cluster of arresting stories and savory exchanges among the black inhabitants of a town named Liberty in East Texas. The stories create a continuing sense of the community in which the central characters painfully live and breathe.

Ephram Jennings and Ruby Bell meet as children and are linked together by complimentary dolls made for them by a local medicine woman. Ephram, at forty-two, is a man-child. His development was arrested at the age of eight when his mother was institutionalized and his older sister, Celia, became his mother. Nonetheless, he feels drawn to Ruby when she returns from New York City and begins acting strangely. From her perspective, the souls of dead children—many the victims of racism and child abuse—seek shelter in her, to protect them from the devilish force that comes in the night.

Both are tolerated by the community, the man-child and the local crazy lady, until they outrage folks by living together. Celia, who has taken a high position in the church, is particularly active in orchestrating the pressure to get her brother back and to put Ruby in her place.

The irony is palpable: church folks lining up against a man who seeks to redeem a haunted woman, due in part to the abuse she suffered as a young girl; folks opposing a couple who are shaping a quietly decent life for themselves.

Bond is at her best in expressing how her characters talk and think. I was particularly struck by her sensitivity to the folk beliefs and perceived forces of the land—the sort of thing difficult for most readers to accept. Ruby adds the consciousness of sophisticated reactions to her situation by her New York friends. Ruby realizes that Ephram simply could not be accepted by the folks she knew there. But seeing him through the eyes of Ruby, readers may empathize with him more than if he were standing in front of them.

Bond’s sympathies do not extend to the well-meaning church ladies, with their proprieties, self-consciousness, hypocrisies, and sheepish conformity. She certainly understands how they think and behave as they try to keep their own on the paths of righteousness. But to vest the folk–spirit world with respect while gleefully satirizing the church that holds the community together is a bit jarring.

Nonetheless, the novel flows with an oral style, carrying the reader past questions of tone and even motivation and into the life of a small community of blacks in Texas. There is sympathy to be gained, and even some grains of hope.