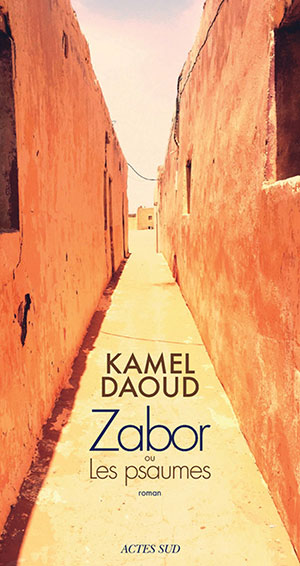 “Writing is the only effective ruse against death. People have tried prayer, drugs, magic, endelessly repeated verses, or immobility, but I believe I am the only one who found an answer: writing.” Thus begins Kamel Daoud’s second novel, Zabor ou Les psaumes, in which a social outcast in an isolated village finds his purpose in life by staving off other people’s deaths through his writing. After years of being shunned by his father and his half-brothers, Zabor finds himself at the center of a family drama when his father is sick and dying. Should he try to save the father who long ago repudiated his mother and banished Zabor to an isolated house? Should he use his skill as a writer to help those who despise him and the texts he produces? This allegorical novel draws on several sources, including One Thousand and One Nights, with storytelling as both a framing device and a temporary respite from decay and death.

Throughout the narrative, numerous flashbacks allow Zabor, the pathetic and strangely misshapen son, who brought only shame to his father, to tell both his story and that of his family: his father the prosperous butcher, with his flocks of sheep; his repudiated (and now dead) mother; the unmarried aunt who shares his status as an outcast; and his half-brothers, who long to take over the dying father’s business. Zabor mostly spends his days sleeping and his nights roaming the village. Occasionally, he is called upon by neighbors who normally avoid him to write a story that will delay the death of a family member. Useless as a worker, unable to marry and have children, Zabor’s only interests seem to be collecting books and writing texts that are incomprehensible to most of the villagers. Normally, they only treat Zabor with pity or disgust, unless of course they need his seemingly magical writing skills, which have prolonged the lives of many.