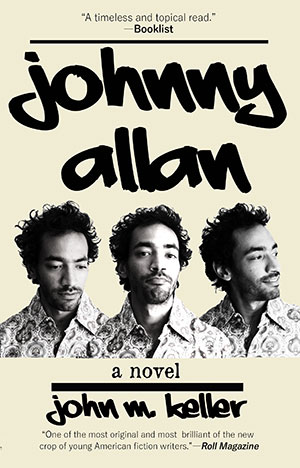 In John M. Keller’s latest novel, a couple takes a young man under their wing, only to have his presence exacerbate and deepen idiosyncrasies and impulses that drive them apart. Allan is in his early twenties when he meets Alan and Amelia, a thirtysomething couple living upstairs from his family. The three of them quickly form a bond as Alan and Amelia work to show Allan their New York, a city of jazz, cocktails, and homemade pizza.

Meanwhile, Allan is navigating a shift in perspective brought on by his phone breaking, which forces him to reckon with a generational culture he begins seeing as flawed and part of a larger “dirtying” of American life. But it becomes clear that Allan’s sense of being born in the wrong time complements Amelia’s belief that the 1920s will soon be coming back into fashion, ushering in a new great decade in American culture. Unsure of the theory and aware of his wife’s connection with the younger Allan, Alan begins finding himself attracted to women Allan dates, making him wonder if he’s looking for something more.

The novel is an interesting look at stagnant misanthropy versus youthful enthusiasm, with a sense of indulgence that veers into carelessness reminiscent of Fitzgerald. What perhaps makes this novel most remarkable, however, is the arc toward happiness the plot charts; despite feeding on one another’s sense of disillusion, we see everyone growing toward a place where they can be fulfilled, a hopeful twist for a novel predicated largely on negative identity.