American Smoke: Journeys to the End of the Light by Iain Sinclair 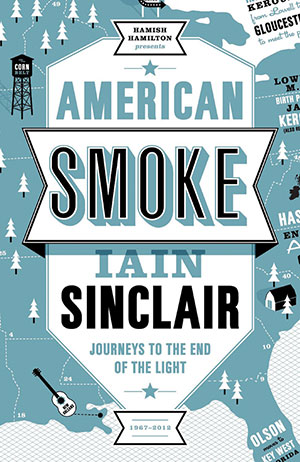 Iain Sinclair sets out on his quest for the ghosts and spirits of members of the Beat Generation because “I needed a new mythology to shield against the sense of loss and hanging dread inherent in the invasion and dissolution of my familiar London ground.” He ranges across America from ocean to ocean, from Charles Olson to Gary Snyder and down the list of marginal figures who have become “living exhibits,” discovering in the process that poets have been “absorbed by the fetishized objects that surround them.” Those who cannot create “a successful brand” and in effect issue an IPO can only fall back on “erasure, suicide, Mexico.”

A collector himself, Sinclair is ambivalent about the turning of creative passion into catalogs and items in air-conditioned vaults or in the “bibliographic landfill” of a fading used bookstore. Those who undertake “the labor of keeping the texts alive” do so, monastically and perhaps heroically, even though “the work loses its potent illusion of edge and discovery” while continuing in “Beckettian absurdity.”

By the end of his journeys, Sinclair is told that he “will never understand Americans” and realizes that it is true, and in that recognition realizes, “I was cured of my interests and obsessions. Cured by confrontation.”

But the quest is not a failure, for along the way Sinclair makes a number of sharp observations about people, as in calling Gregory Corso “the Joe Pesci of the Beats,” likening him to the character in Casino, the foil to “Ginsberg’s Jewish De Niro, who was trying to do business, keep the Beat empire moving and growing as a great American resource.” Gary Snyder, sustained in his retreat by leaving it to give lectures, emerges as the most solid of the people whom Sinclair encounters, not just surviving but grounded.

Sinclair has been known for his interest in psychogeography, and American Smoke exhibits throughout a keen sense of what  D. H. Lawrence called “the spirit of place”—most notably, in a few lines, of Seattle’s Pike Place Market, where the details of “Heroic metaphors of success” make even the most jaded stop and look again.

The same could be said of Sinclair’s style, which is occasionally as dense and chewy as a pumpernickel bagel, as in, when describing Nevada City, “weekend tourists take brunch in revamped saloons with sepia photographs of the mining days” or when Ingrid Bergman “wrestles the big cone of sweating roses into submission.”

Perhaps more tantalizing are the interwoven but undeveloped references to writers like John Clare and Roberto Bolaño and to a painting at a museum in Cape Ann, Massachusetts, signs that Sinclair is artist enough to be comfortable with irresolution.