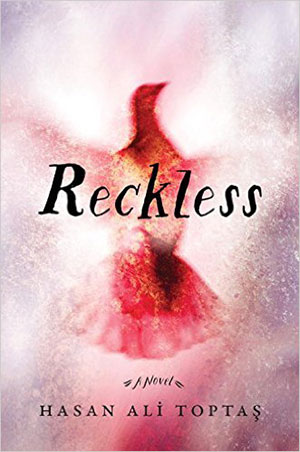 Reckless is the latest novel by the award-winning Turkish writer Hasan Ali Toptas and the first of his books to be translated into English. It tells the story of a middle-aged Turkish antihero, Ziya Kül, who is haunted by the tragic death of his wife and unborn child and the terrorizing military experience on the Syrian border. Toptas’s compelling narrative of trauma depicts the silent erosion of Ziya’s soul in a chaotic world governed by mob mentality, poverty, ignorance, and a cruel, hypermasculine military culture.

At the center of the novel is Ziya’s final and tragic attempt to find peace in life. But as the original title, Heba—which means “waste” in Turkish—foreshadows, Ziya’s inner turmoil, suffering, and angst will follow him everywhere, and his move to the Edenic village of Yazikoy will not save him.

As a prolific and versatile Turkish writer, Toptas is known to cultivate his own style as a novelist, but this does not mean his craftsmanship is comparable to Tanpinar, Pamuk, or Yaşar Kemal, and structurally and stylistically, the novel presents the reader with challenges. His narrative technique, particularly his use of metaphor, dreams, allegory, and folkloric storytelling, may be captivating at times, but some of these technical and stylistic components remain problematic, and some get lost in translation. For instance, the novel presents the reader with seemingly innovative yet short-lived wordplays and with a crowd of underdeveloped characters such as Binnaz, Cevriye, and Hulki Dede, who at times monopolize the narrative with artificial philosophical outbursts. “Border” constitutes the climax and is the most exhilarating of the seven chapters in the novel, showcasing Toptas’s keen eye and descriptive language, narrating the tyranny of Turkish military service in the pre–coup d’état years. Unfortunately, the rest of the chapters are not as refined.

The translation—although the registry is masterful—remains stiff and at times questionable. For example, “Bilirim, dedi, sonra; senin gibi has insanlar daima boyledir, ettikleri iyilikleri unuturlar” is translated, “‘I just know,’ she said. ‘Strange people like you are always like this, you forget your good deeds.’” The word has here is intended to be a compliment, emphasizing the fact that Ziya is a fine man. The word “strange,” however, changes the perception of Ziya’s character and the dynamic between Cevriye and Ziya.

Toptas certainly captures Ziya’s traumatized psyche with utmost care. It is this meticulous weaving of a tragic character, not so much the structural or technical mastery of a tragedy, that makes Toptas’s Reckless enticing for readers.