The Knowledge by Robert Peake 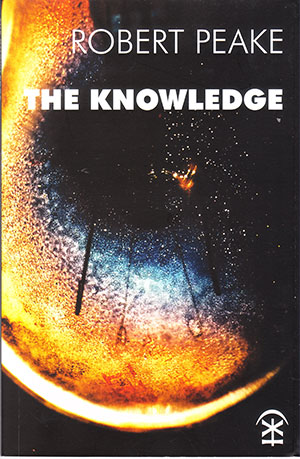 Any discussion of differences between American and British poetry begins and ends with the fact that we hardly ever read each other. Why that is so is anybody’s guess, though the sheer amount, not to mention plurality, of poetry books published in both countries can occupy even the most generous and outward-looking readers for years. Indeed, Americans don’t read British poetry because we barely keep up with our own scribblers, while the British—one can’t be faulted for recalling—are doing their best to protect local talent.

Needless to say, this defensive justification is part of the problem—there is much fine poetry to be enjoyed on both sides of the pond. The days when one feared losing a sense of direction or identity because of a few well-chosen books are long gone, alas.

Nevertheless, the idea of knowing one’s place, within and without, sits at the forefront of Robert Peake’s fine debut full-length collection. This British-American poet’s talent for detail and tonal coloring was already on display in his Poetry Salzburg chapbook, which came out in 2013 and was dedicated to eulogizing Peake’s infant son, but it is only now that we can enjoy the full reach of his poetic skill. Some readers may find The Knowledge slightly overwritten, but that is only because these poems are fueled by the poet’s insatiable wish to understand himself and the world around him; only a poet worldly enough would declare that “The smallest of fish / is sufficient to be my mother” or that he is “both wind and tree.”

Peake’s longer peregrine poems, like “The Last Train from Siena to Florence,” or his sequences, especially the excellent “Smoke Ring,” exemplify and even embody a desire to “touch everything he sees,” including “the dark matter stirring beneath the surface.”

Grouped into three sections, these poems swell and contract, releasing a great deal of energy in the process. Like a perfectionist cameraman, Peake is after the “dust in a shaft of light,” recognizing both its negative and life-affirming qualities. America’s wars are also his, not because he was a Yank before he became a Brit but because he is a concerned citizen who, baffled and troubled like the rest of us, “[raids] the air for meaning.” Being equally restrained and voracious in his kaleidoscopic recording of the here and now allows Peake to leave room for surprises to pop up, like in the wonderful “Tap Water,” in which he writes: “I think of you when I turn the tap, the alleged / seven others who have drunk this water before me.” That this poem ends on a note underscoring the speaker’s longing for his variegated individuality, a major gesture that Peake skillfully alchemizes to be seen as small and beautiful, and does so time and again in this wonderful book, only strengthens one’s belief that he and his poems are here to stay.