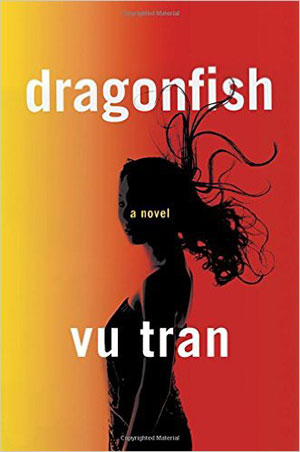 When someone who holds a reputation as a literary writer publishes a crime novel, mystery writers grimace. Too often the novel originated in a misbegotten quest for the imaginary fortune that crime writers make. Too often the elements are handled wrong. Too often in condescending to the genre, the writer intends to “improve” it but totally mucks it up. Vu Tran has been building a substantial literary reputation with his short stories, winning awards such as the O. Henry and being a finalist for the Vilcek Prize for Creative Promise; however, Dragonfish gives all the pleasures of the hard-boiled detective novel without condescension and does it with clean, elegant prose and a rich atmosphere that would have made Raymond Chandler proud.

The story’s protagonist is Robert, an Oakland policeman who married a Vietnamese émigré. Suzy, as she calls herself in America, was a difficult spouse, but with exactly the kind of difficulties that arouse men’s protective instincts and inspire obsessive love. She’s the kind of trouble a man can’t quit, even when he knows it might save his life. Suzy deserted Robert and married a Vietnamese gangster, Sonny, who is also obsessed with her, and she now has run away from him. Sonny demands Robert find her, even though Robert has had no contact with her for two years. One is reminded, of course, of Marlowe’s quest for Velma in Farewell, My Lovely, but not to Vu Tran’s detriment. Along the way, he flashes back to the experiences of the desperate Vietnamese forced to flee their country to avoid their compatriots’ revenge.

Strangely, this creates one of the contradictions of the novel. The background simultaneously enriches the story while it distracts from the detective story. The history, set in the form of a journal and distinguished by italics, is a compelling story, but it basically is intended to illuminate the immigrant characters and doesn’t directly impact the detective story. Perhaps its power is also the reason that Robert seems less realized than he should be. Suzy, Sonny, and his sons—all are complex and compelling, but Robert not as much. The better a novel is, the more we long for its apotheosis. Perhaps there were two novels here, one for Robert and one for Suzy or Sonny. I hesitate to write that, simply because it seems like nitpicking. Dragonfish is nonetheless an excellent straight-up novel, and easily one of the best detective novels I have read this year.