Where Have You Been? Selected Essays by Michael Hofmann 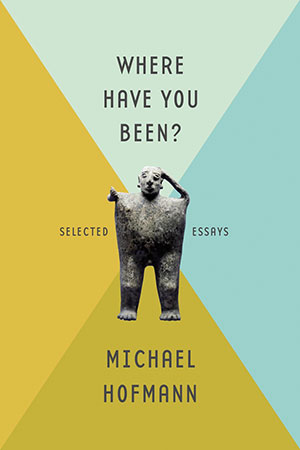 For translator, poet, and literary critic Michael Hofmann, linguistic encounters remain entrenched in the state of being bilingual: “The matching of my two languages is an inner process, the setting of a broken bone. . . . Perhaps it can even be claimed that in me German is in some way an open wound, which is soothed and brought to healing by the application of English.” Acts of English literacy as curative consistently run throughout Where Have You Been?, a compilation of twenty-five accounts illustrating the intensely personal relationship the writer shares with the written word.

First, the balm of English. The book commences with two essays tracing the continued correspondence between poets before relaying a series of intimate encounters with works read solely in English. As with all healing, there is pain. Most tellingly, the first section shows the writers themselves as they piece together the shards of their own lives through writing. Ian Hamilton’s hesitant language to retell the death of his father, for example, neatly offsets the luminous productivity of Ted Hughes who, under an isolating spell of Beethoven, could compose an entire creation through employing close proximity of noun phrases swelling inside a forceful vortex of sentences. As Hofmann describes both the creation and healing exhibited by these works, he reflects his experience with the written word in English as restorative.

Unfortunately, the invigorating rush of language dampens when Hofmann concentrates on those works not originally written in English. This is clear in his initial skirmish with a particularly discordant translation of Zbigniew Herbert’s Collected Poems. His description of the attempt as “slack, chattersome, hysterical, full of exaggeration, complacency, and reaching for effect” despite his unfamiliarity with the original Polish, displays a flawless sensitivity to the subtleties of language. This acute awareness of language intensifies when he contrasts two translations from German. He dismisses Schaefer’s rendition of Arthur Schnitzler’s “Dream Story,” while praising Davies’. This recognition is so complete that Hofmann concludes: “It’s no great mystery, and nothing much to do with German; both ‘translate’ the German, but I’m afraid only one of them writes English.”

But perhaps it has everything to do with German. The painful rendering of a double-faced Günter Grass quadruples in torment when discovering the deeply psychic division of Gottfried Benn, whose autobiographical Doppelleben grossly underestimates the consequences of a life ruptured by history and circumstance. Lesions deepen even further as the collection ends with Robert Walser, a writer whose microscopic letterings were so small they could only be discerned as alphabetic when placed under “an optical device used for the counting of threads.”

Overall, the collection of essays begins on a soaring note and ends as tragic. English as anesthesia, when applied topically, soothes the psyche of a critic aiming to navigate literature for the reader. The compass’s intended stabilizing force, however, diminishes when German stands alone.