Flood of Fire by Amitov Ghosh 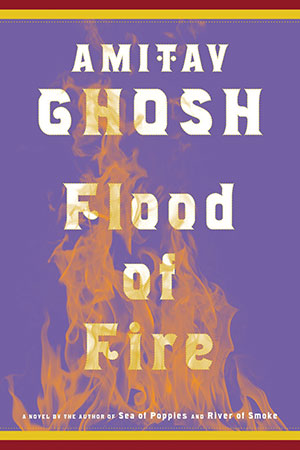 Throughout his work, Amitav Ghosh considers the ramifications of commercial, political, historical, and personal networks that span the globe. In the final novel of his Ibis trilogy, Ghosh interweaves the storylines of the preceding novels in a manner that underscores the plot-driven quality of these novels and Ghosh’s penchant for thinking in global terms. In Flood of Fire, Ghosh reacquaints readers with several characters introduced in Sea of Poppies, including Neel Rattan Halder, Zachary Reid, Paulette Lambert, and Baboo Nob Kissin.

Amid romance plots and battle scenes on land and water, Ghosh continues to probe the historical implications of a messianic free-trade doctrine in language that applies to contemporary critiques of capitalism’s excesses. As the back matter in the Ibis novels indicates, Ghosh has profound respect for archival sources. At times Ghosh’s love of detail gets the better of his storytelling acumen and mundane information bogs down the narrative. Fortunately, more frequently, Ghosh imbues his descriptive passages with a brio that entertains and intrigues: “Few were the tamashas that could compare with the spectacle of the Bengal Native Infantry on the march. Every member of the paltan was aware of this—dandia-wallahs, naach-girls, bangyburdars, syces, mess-consummers, berry-wallahs, bhisties—but none more so than Havildar Kesri Singh, whose face served as the battalion’s figurehead when he rode at the head of the column.”

Among the new characters introduced in Flood of Fire, Kesri Singh is the most compelling. Kesri, Deeti’s older brother, leaves his village to join a regiment in the East India Company, serving with honor in what Kesri increasingly realizes is a dishonorable enterprise. Not only does Kesri recognize that “in a lifetime of soldiering he had never known what it was to fight . . . for something that tied you to your fathers and mothers,” he also realizes that “doing his job” in the service of the East India Company makes him little different from “hired murderers.” Kesri’s eventual disenchantment with the system he serves is contrasted with the development of Zachary Reid from “an ingenuous, good-natured boy” into what Baboo Nob Kissin considers “a perfect embodiment of the Kali-yuga,” the age of vice in Hindu cosmology. While Ghosh often treats his characters with generosity and empathy, the portrayal of Zachary steadily turns unsympathetic: “I have become . . . a man of the times . . . a man who wants more and more and more; a man who does not know the meaning of ‘enough.’ Anyone who tries to thwart my desires is the enemy of liberty.”

In the Ibis trilogy, Ghosh shows us a different kind of liberty built upon a love of language, an unflinching appraisal of human folly, and the hope that telling stories can bring us a better, perhaps more benevolent, future.