I Refuse by Per Petterson 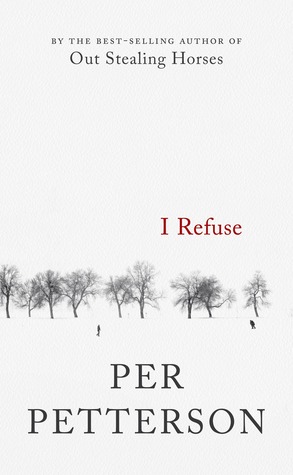 I Refuse begins with the chance meeting of former best friends Jim and Tommy after thirty-five years. The narrative then meanders them back and forth through time, even within precisely dated chapters, as the “I” and omniscient narrators reveal hidden dimensions of their most seminal moments.

In his latest novel, Petterson again explores dysfunctional or broken families adrift in the suffocating provincialism of 1960s working-class Norway, whose mantra is “refusal.” While Jim is fatherless, Tommy’s too-visible father protests his fate by abusing his family. Tommy’s mother, Tya, abandons her young children “so as not to lose her life”; Tommy injures his father, whose subsequent departure leaves his children parentless; and Tommy’s sister, Siri, spurns adult connection but works for Save the Children. Jim rejects Tommy, disdains his religious, conservative mother (whose fatal cancer later unites them briefly), destroys an early relationship, and endures a painful divorce, while Tommy remains alone too. Only hard-working bachelor Jonsen, one of Petterson’s tough but generous mentor figures, futilely tries to bond with Tya, aids her escape, and later “adopts” Tommy.

The boys refuse Norway’s rigid norms, embracing American culture and Western literature. But Jim, who studied English literature, no longer lets books guide him. At forty he rejected D. H. Lawrence’s “thirst for life” as it “burned” in his hands while his mother lay dying. Working-class Tommy has stopped reading fiction but still treasures Jim’s long-ago gift, Steinbeck’s The Moon Is Down (whose unnamed village resists “occupiers,” evoking Norway during World War II), as an emblem of Jim and freedom.

Their initial encounter contrasts the men’s psychic and socioeconomic conditions. Excited to see Jim, Tommy recognizes the badly worn jacket that when new signified Jim’s exotic hero status. But now Jim lives austerely, refusing to seek employment after his year’s medical leave (for panic attacks and undiagnosed pains) from his position as head librarian. Tommy, meanwhile, developed Jonsen’s work ethic, prospering in high finance. But he finds no joy in his many “things,” and his unexpectedly fine clothes and car sharpen Jim’s sense of failure.

The text eventually reveals what ended their friendship. At twenty, Jim, like Conrad’s Lord Jim, longed to be “worthy.” Instead, in a moment of fear, he endangers Tommy. His sense of failure and harsh self-judgment, despite his friend’s supportive stance, lead him to attempted suicide, hospitalization, and paranoia: he imagines that Tommy means to poison him. Thereafter, Jim’s mother moves them away.

A haunting beauty suffuses this spare, nuanced text whose final sections, “The Last Night,” portray two forms of refusal. Both men have embraced negation, filling their voids with drink and nameless women. Jim has the last word, following the “narrow, slippery rope from childhood” to fulfill his self-pronounced sentence. But in the penultimate chapters, Tommy bonds with Berit, the girl behind a café counter, stagnant in her deadly marriage. About to seek the doomed Jim again, Tommy feels Berit’s “sensational, warm, living breath”: “I have a girlfriend now. . . . life is different now.” Refusing “dead ends,” they embrace Lawrence’s “thirst,” daring to forge real connection.

More by Per Petterson