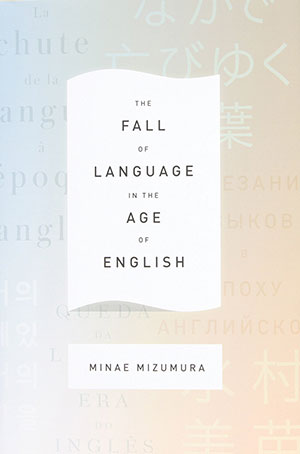 Minae Mizumura is no stranger to accolades, having won major awards for many of her books, including the Kobayashi Hideo Award for this one. These honors notwithstanding, The Fall of Language proves hard to review. Part polemic, part self-important autobiography, and part panegyric, this fluid mix yields a thought-provoking romp through the gravid fields of translation studies, linguistic imperialism, and identity. Both the premise and promise are inherently appealing to anyone who works in multiple languages. Indeed, if the author is to be believed, the topic is of global concern to all speakers of a language other than English. On the other hand, her argument is rife with examples of Nihonjinron (theories of Japanese uniqueness) that almost scream out to be challenged. Complicating matters is the fact that there is more than a grain of truth in some of the realities underlying this Japanese exceptionalism, and it is those elements that help support what is, ultimately, an intriguing rumination—highly personal, broadly relevant, and often frustrating—on the fate of local and national languages in the face of an apparently monolithic universal language.

It is an obvious irony that Mizumura’s polemic against English is being reviewed as a translation into that very language, but it is also fortuitous, for it convincingly demonstrates her proposition. She posits that English has supplanted Latin, after centuries of domination and through the caprice of historical accidents, to become the world’s “universal language.” What defines (and sustains) a universal language, Mizumura argues, is its role as the primary purveyor of (global) knowledge, particularly among those for whom it is an external language (one written or read by a speaker of a different language). From this premise grows an impassioned plea to resist—but not overthrow, which may be impossible—the inexorable catholicizing effects of this hegemony.

Mizumura’s exegesis on the development of modern Japanese literature in the face of this relentless force would seem to share some theoretical DNA with what Stephen Greenblatt calls “the swerve.” Her construction of literary history is engaging and provocative yet idiosyncratic, and with only minimal academic armature. In a practical sense, all this means is that she has served up an idea worthy of greater explication drawn from her personal experiences as a learner of foreign languages, a scholar of French literature, a novelist, and a citizen focused with almost nationalistic zeal on the need to preserve a culture she loves.

In the final analysis, The Fall of Language both lacks the requisite academic rigor and overindulges too frequently in the burdens of privilege to call it an unqualified success. Too often is the reader pulled from the core problematic by extraneous or yet-inchoate arguments that simply beg for refutation; yet the extent to which one can forgive these foibles will determine how readily her arguments find fertile soil in a kindred mind. Whatever failings it may have, Mizumura has crafted a book that stimulates thought, excites passions, and encourages debate. For these alone, it is well worth a read.