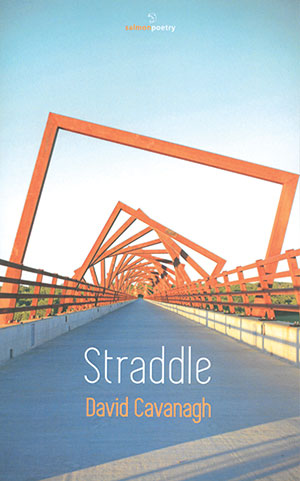 The little town in which I teach has sustained a Thursday-night open-mic poetry event for the last twenty-one years, and I have been a regular part of it for ten of those years. Most of what I’ve heard there, however good or bad, has had a certain open-mic quality to it, something in the way it is oriented toward its audience. I mean this as a compliment; I’m all for poetry that considers its audience, especially when I am in that audience. As a species, the open-mic poem aims to be accessible, engaging, witty, and—occasionally—poignant. This is the kind of poem David Cavanagh attempts—often successfully—to present in Straddle.

As the title suggests, Cavanagh’s poems often engage with themes of border crossing, but rather than academic and obtuse poems on the perennially trendy topic of liminality, he offers poems that are accessible in their concreteness and specificity. The theme is often expressed in poems about living in the very porous borderlands of French-speaking and English-speaking Canada. He also writes frequently about crossing back and forth across the US/Canadian border. If the poem “Crossing”—which reads in its entirety, “‘Anything to declare?’ / asks the border guard. / Oh my. Where to begin?”—is a little too pat and pandering, the theme is handled beautifully in the longer “Behind the Plate in Montreal, 1964,” which deftly weaves together a sense of separation by language and religion with a sense of community in sport. That the book is published by a press based in Ireland perhaps adds one more subtle border crossing to the mix.

Cavanagh’s best poems achieve not only clarity but also a poignancy that derives from simple wisdom expressed with great vividness and grace: open-mic at its absolute best. These poems include “Neil Armstrong R.I.P,” “Skating on Mallettt’s Bay,” and “The Beautiful Men.” This last is perhaps the collection’s finest. In it Cavanagh, with great economy of language and precision of image, compares to their rugged pioneer ancestors those young fathers cultivating the new masculinity, the revised expectations of fatherhood. The wit lies in that these young men are not in contrast to the rough-and-ready pioneers but rather resemble them in their adventurous spirit of discovery: “The fields and far / mountains of gentleness they’ve fumbled for, / found.” The poem is simple, vivid, insightful, and completely accessible.

I’m not among those who ardently bemoan poetry’s migration into academia. I think, in fact, the modern university has nobly stepped into the role once played by wealthy patrons of the arts and thus helped to keep literature alive in an economy indifferent to it. It is crucial, however, that we maintain poetic cultures outside of the university as well: the local open-mic as a remedy for total academic hegemony. Straddle is an example of this other tradition at its best.