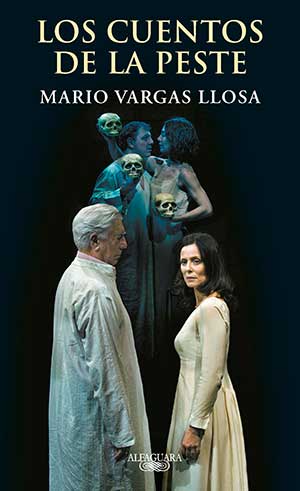 Mario Vargas Llosa’s latest play, Los cuentos de la peste, was first performed at Madrid’s Teatro Español in early 2015. Directed by Joan Ollé, it starred Vargas Llosa himself as the Duque Ugolino and Aitana Sánchez-Gijón as Aminta, or the Condesa de la Santa Croce. The play is loosely based on Giovanni Boccaccio’s Decameron, a narrative originally made up of ten characters and some one hundred tales first published in the fourteenth century upon the arrival of the plague in Italy.

Vargas Llosa’s lengthy introduction on the life of Boccaccio provides the reader with an important context and provides some insight into why he was attracted to Boccaccio’s world and the narrative nature of his tales before turning it into a twenty-act play. Los cuentos de la peste is set in Villa Palmieri, near Florence. There, five characters of varying ages and multiple identities meet during the final days of the plague in 1348 to share stories with one other. Aware that the possibility of death surrounds them, each of these characters’ imaginations is set free. Soon the reader is witness to a variety of tales of human deceit, sexual desire, and dark humor. As a result, the intense storytelling finds them sharing narratives of pain, personal struggle, and guilt.

In Los cuentos de la peste, intense sexual passion is portrayed in the many exchanges between the mature Duque Ugolino and the young and beautiful Aminta. But while Ugolino makes Aminta his great object of desire, he must acknowledge that she is also a “ciudadana del reino de la fantasía” (a citizen of the world of fantasy), that is, a fabrication of the duke’s imagination. In fact, Ugolino’s rich imagination is further underscored by the presence of Boccaccio himself as a character in the play, an individual portrayed as a gifted writer but one haunted by solitude and guilt. In that sense, despite his personal wealth, Boccaccio’s life seems no different from the many lives imagined by Pánfilo and Filomena, two other multifaceted characters who at first appear to be passionate lovers but who may also be brother and sister who practice incest.

Early in the play, we hear one of Vargas Llosa’s characters say to the rest of the group: “¡Basta de realidad! Volvamos a la fantasía, donde estamos a salvo” (Enough of reality. Let’s return to fantasy where we are safe). As in much of Vargas Llosa’s fiction, Los cuentos de la peste underscores literature’s ability to create an alternative reality, thus allowing human beings to temporarily flee from an imperfect, hostile existence. As this new set of characters well prove, it is thanks to the art of storytelling that through exposing their most hidden desires, all the while remaining immune to the plague and its inevitable consequences, they can nevertheless celebrate life—a moral lesson that Boccaccio himself would also have been willing to share.