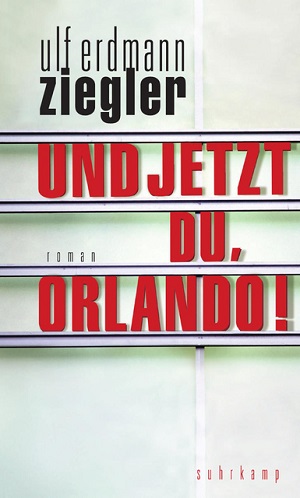 Und jetzt du, Orlando! (And now you, Orlando!) is the account of a friendship between the narrator, Oliver, a German accountant employed by a film distribution company in London, and Orlando, an enigmatic figure who works for a spin-off company buying rights to film music. The friendship between Orlando and Oliver develops over pub visits and long evening walks through the British metropole and plays itself out during the final decade of the twentieth century.

The similarity in the names of the two main characters hints at a recurring trope in the book: parallel lives. The novel is full of ambiguous doubles (namesakes, false twins, dual identities) that both give shape to the plot and complicate it. At the same time, key conceptual pairs (dark/light, male/female) neither quite hold up nor entirely break down. Indeed, Oliver’s friend Orlando, through whom he reflects on his own life, could recall Virginia Woolf’s famously elusive, morphing, androgynous character of the same name. Meanwhile the movies of the era, discussion of which winds through the book, provide yet another kind of indispensible yet distorting mirror for the characters’ lives.

This book represents the third novel for Ziegler, who is also a prolific essayist and art critic as well as a photographer of note. All three of his novels address visual culture of the last several decades: his first on architecture, his second on typography and graphic design, and now this one on film. In fact, one could speak of a visual, or even photographic style in his prose: he writes with a descriptive intensity that renders familiar objects strange but strikingly luminous. In his depiction of the 1990s, an era no longer fresh in individual memory but not yet fully in focus as history, Ziegler achieves this dual effect of estrangement and recognition with remarkable power.

Ziegler’s London of the 1990s is an appropriately fluid setting for this novel of converging and diverging lives. His characters navigate through a city not yet—but soon to be—rigidly gentrified, during that in-between era after the end of the Cold War and before the declaration of the War on Terror. They enjoy a flowering of European film prior to the advent of the Internet and the overwhelming incursion of global capital. Ziegler has created an often witty, sometimes elegiac portrait of a lost friendship, culture, place, and time.