The Secret Sister by Fotini Tsalikoglou 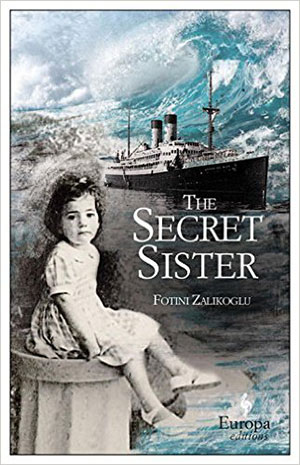 In her English-language debut, Greek novelist Fotini Tsalikoglou explores the spaces between the past and the future through an intimate glimpse at the lives of immigrants both leaving and returning to their homeland. Jonathan is a second-generation Greek American on a plane to visit his family’s ancestral country, a place he feels both connected to and separate from through the tender linkages his family felt to their heritage. Growing up with his grandparents, single mother, and sister, he grew into the weight of secrets, such as his father’s identity and the sister of whom his grandmother had never spoken. Now, leaving New York City behind to visit Greece for the first time, he attempts to work through the memories that haunt him in the wake of a family tragedy. His mother’s alcoholism, his grandfather’s illness, his grandmother’s long and tumultuous road to Greece—it all leads up to his sitting in a plane, going back to the place it all began, in hopes of clarity.

Tsalikoglou’s use of the details is masterful as she slowly peels back layers of meaning and family history to reveal a complex relationship between the Argyriou family and the country they left behind. In the claustrophobic present setting–a plane seat on a transatlantic flight—the tension mounts as Jonathan makes his way through the memories he shares with his sister, Frosso, a voice he hears in his head even in her absence. His attempt to understand and process the past reveals a fraught home life filled with silences and emotional outpourings of truth that gave him no comfort. The prose is concise, leaving as much to the imagination as it spells out. The result is a hauntingly poignant look at the secret lives and memories of those with whom we consider ourselves closest and the ways in which places can be defined for generations by the secrets we keep and the truths we reveal.