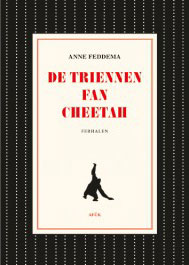 Some stories bring us up close to the wonder of the ordinary and enrich our sense of humanity. Some help us discover the peculiarities of being human and enlarge our understanding. And then there are some that remind us of our imagination’s capacity to leap from the real to the surreal and leave us wondering about the meaning of it all. Anne Feddema is that kind of storyteller.

For example: the story of a young reader, under the spell of his book’s fantasy, projecting a frightening fantasy of his own as the gathering dusk settles around him; the story of renowned painter and Frisian-born Sir Lawrence Alma-Tadema, wandering around London as a starving artist and meeting Charles Dickens, who feeds him and commissions a painting for a hefty sum, only to die before it’s finished; the story of a teacher of German, sitting in an outdoor café, imagining seeing Rainer Maria Rilke among the street workers, who then follows him into a public restroom for a homosexual encounter; the story of General Pattimoon, ready to go off to war, only to discover that everything around him has suddenly frozen into immobility; the story of the writer who in Barcelona tries to break through his writer’s block and finds himself turning into a frozen but conscious statue of Picasso.

The various locales for these stories, which range from Scandinavia to California, add interest and color. There is no dominant theme as a linking device, though a thread that runs through many of them is the negative motif of failure, violence, disillusionment, or death. One such memorable story is “Revenge,” a story that begins as a beautifully descriptive idyll and ends as a demonic holocaust: a nature walk “where it is still quiet and peaceful in the darkly shaded deep-green forest, where one can hear nature whisper” turns into a nightmare experience of bloody killing fields as unreal monsters slaughter the innocent, unreal creatures of nature, a chilling reminder of the real world around us. Perhaps the characters are in part projections of the storyteller as a wounded soul, wounded by the failure to find life inherently meaningful. The imagination then finds its escape into surrealism and the absurd as the condition of human existence. Through these stories Feddema surely stimulates the reader’s imagination, though he sometimes disappoints when an ending comes too abruptly, falls flat, or is so far-fetched that it threatens the import of the whole story, such as the ending of the fox and raven fable, in which an ant with a violin teams up with an opera-singing human shark and they play havoc together.

The author is both an award-winning painter and poet. The vivid details, poetic touches, and allusions in these stories attest to that: Kandinsky, Ensor, Munch, Hoffmann, Goethe, Grimm, Pushkin, Doctor Zhivago, and others. He is currently under nomination for the 2015 Gysbert Japicx Prize for fiction.