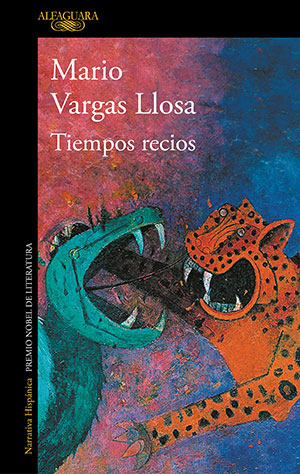 IN TIEMPOS RECIOS, Mario Vargas Llosa returns to a central theme in his fiction: political power and Latin American dictatorships. In 1954 Guatemalan president Jacobo Árbenz was overthrown in a coup d’état and replaced by dictator Carlos Castillo Armas. During his three years in office, Arbenz, a democratically elected president, tried to implement reforms that would force the powerful United Fruit Company to pay taxes and guarantee decent wages for its workers. However, due to a carefully orchestrated campaign led by publicist Edward Bernays in the United States, the Eisenhower administration soon labeled Arbenz’s presidency as a Communist threat in Central America.

Vargas Llosa puts together a fast-paced narrative, nurtured by solid historical evidence, explanatory reflections on this time period, suspense, and a rich imagination to create memorable characters. Along with his depictions of Arbenz and Castillo Armas (the CIA’s choice to replace Arbenz) and their personal struggles to rule Guatemala, he brings back Dominican dictator Rafael Trujillo and Johnny Abbes García, two memorable characters from La fiesta del Chivo (2000). Trujillo will play a key role in assisting the CIA to organize the coup against Arbenz, sending the sinister Abbes García to handle the details.

All these characters will share center stage with the novel’s most memorable character, Marta Borrero Parra. Known to locals as “Miss Guatemala” because of her striking beauty, Marta is abandoned by her father after she becomes pregnant as a teenager. Later, when Arbenz is removed from office, Marta will become President Castillo Armas’s mistress, and, upon his assassination, she will be seduced by Abbes García himself, with whom she escapes Guatemala for the Dominican Republic.

At the end, in another twist, we find Marta, now eighty years old, living alone in Florida. There, in a clever juxtaposition between fact and fiction, she is visited by Vargas Llosa, who tries to interview her about all the events that took place in Guatemala for the novel he is writing. In one of the novel’s best passages, Vargas Llosa is surprised by Marta’s stunning beauty, still possessing a “mirada verdegrís que parecía trepanar a sus interlocutores, y los dejaba desconcertados y turbados” (a green and gray gaze that seemed to entrap her interlocutors and leave them disconcerted and bewildered). However, he will also discover her intriguing personality when he dares to ask her who really killed Castillo Armas and her dealings with the CIA. Suddenly, the woman’s beautiful eyes will show their mischievous side, angrily dismissing Vargas Llosa’s inquiries: “[como] si quisiera crucificarme contra la silla” (as if she wished to crucify me in my chair). Shortly thereafter, as he exits Marta’s home, she warns him that she will not read his book, but that her lawyers will be ready to do so.

Tiempos recios not only depicts important historical events between Latin America and the United States during the Cold War; the work is also a narrative about historical truth and the many hardships that individuals will endure under extenuating circumstances as a result of political power, corruption, and deceit. It is yet another example of Vargas Llosa’s great talent as a storyteller.