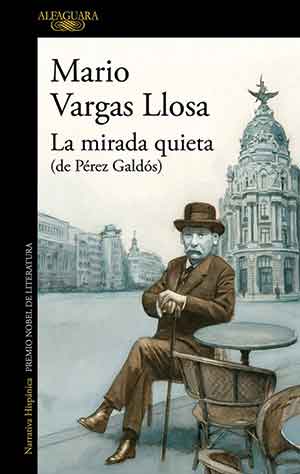 THROUGHOUT HIS outstanding career as a fiction writer, Mario Vargas Llosa has also distinguished himself as a notable literary critic. His books on Gabriel García Márquez, José María Arguedas, and Juan Carlos Onetti, for example, offer a comprehensive overview on the works of these major Latin American writers. The same can be said about his careful readings of Gustave Flaubert’s Madame Bovary or Victor Hugo’s Les Misérables. In La mirada quieta (de Pérez Galdós), the works of Spain’s most acclaimed novelist of the nineteenth and early twentieth centuries is the focus of the Peruvian writer’s attention.

Once again, Vargas Llosa’s approach to Galdós’s writings is ambitious and all-encompassing. Upon reviewing his novels, drama, and Episodios nacionales, it becomes clear that Galdós is Spain’s most important chronicler of that time. As Vargas Llosa writes, “Galdós did as Balzac, Zola, and Dickens did in their respective nations: tell the history and social reality of his country. With his Episodios, he did the same as they, turning that vivid past into literary matter, making available to the public a quiet, yet pleasant, and well-written version with lively characters and reliable documentation of a decisive century in Spanish history.” While Vargas Llosa considers Fortunata y Jacinta and Torquemada en la hoguera two of Galdós’s masterpieces, the Peruvian does not stop short in pointing out some of the Spaniard’s flaws as a writer, the most important of which is the creation of a solid narrative voice in a work of fiction, as Vargas Llosa learned long ago from Flaubert. It is such a flaw, in Vargas Llosa’s mind, that prevents him from comparing Galdós to some of his best peers (Balzac, Dostoevsky, et al.) and that causes Galdós oftentimes to fall into a “quiet gaze” in portraying Spanish reality.

Nevertheless, in his conclusions, Vargas Llosa asks himself: “Was he [Galdós] a great writer? Yes, he was. In the nineteenth century and early twentieth, there is none of his fellow countrymen who had such dedication, ingenuity, commitment, and literary fluency as Pérez Galdós.” In the end, as in most of Vargas Llosa’s criticism, the careful reading of Galdós’s fiction unveils the Peruvian writer’s preferences as he reflects openly on the craft of the novel.

La mirada quieta is a well-documented, provocative essay that invites us to reconsider the many facets of Galdós as a writer and a man of his time. It reminds us why he remains a key figure in the history of Spanish letters.