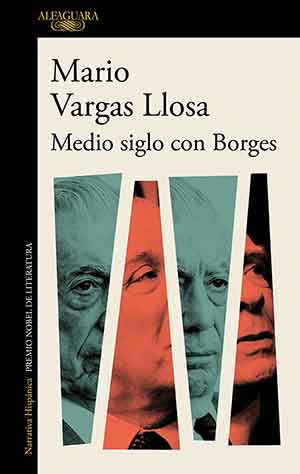 MEDIO SIGLO CON BORGES is a compilation of interviews, essays, and reviews written by Mario Vargas Llosa about Jorge Luis Borges over five decades. In many ways, the volume is Vargas Llosa’s homage to a writer he has deeply admired since the 1950s. Such an opinion holds a hidden irony, however, for while Vargas Llosa is himself a staunch realist, concerned with politics and contemporary social debates in his fiction, Borges’s writings revolved around more abstract themes such as dreams, labyrinths, philosophers, and mirrors. In books such as Ficciones and El Aleph, Borges made significant contributions to philosophical and fantasy literature and, in so doing, established a rich dialogue between Latin American letters and other world literatures.

The book opens with a conversation between Borges and Vargas Llosa in Paris in 1963. In it, Borges confesses his admiration for Flaubert’s novels as well as for the poetry of Verlaine and Apollinaire. However, when asked about his interest in politics, he quickly replies that politics is nothing short of “una de las formas del tedio” (a type of boredom) for him. He repeats this idea on politics in another interview from 1981, while also expressing his admiration for Joseph Conrad’s and Henry James’s novels and asserts that modernismo was Latin America’s most important contribution to Hispanic literature.

For Vargas Llosa, Borges “inventó una prosa en la que habitan tantas ideas como palabras” (he invented a way of writing in which there are as many ideas as words) and authored short stories that he describes as unusual, perfect, and cerebral. He credits him for a body of work that, along with his poetry and essays, constitutes pure intellectual pleasure. At the same time, he underscores Borges’s cosmopolitanism. Indeed, Borges was an author who enjoyed speaking about French or English literature as much as he did exploring old Scandinavian myths. He shared these interests with numerous reflections on Argentine literature and culture, amid a unique style of writing that was always rigorous and intelligent, as Vargas Llosa ably comments in “Las ficciones de Borges” (The Fictions of Borges) or “Borges entre señoras” (Borges among Women).

The ten pieces included in Medio siglo con Borges are highly recommended reading to review the many facets of Borges as a writer and as a public figure from the perspective of another key protagonist of contemporary Hispanic letters. In them, Vargas Llosa pays tribute to an author he has read with admiration over the years and who is arguably the most important Latin American writer of the past century.