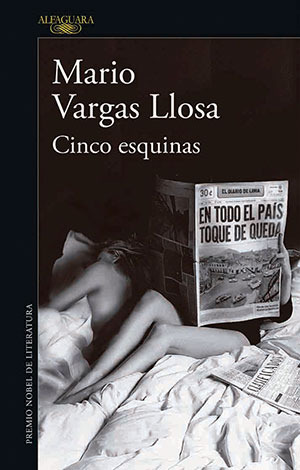 Mario Vargas Llosa’s latest novel is as much a psychological thriller as it is a compelling portrait of power and corruption in Peru’s recent political history. Set in Lima during the dictatorship of Alberto Fujimori (1990–2000), the plot of Cinco esquinas is twofold: the odd-numbered chapters tell the story of Enrique Cárdenas, a wealthy entrepreneur who belongs to the Peruvian elite, while the even-numbered ones focus on the story of Rolando Garro, the unscrupulous editor of the weekly tabloid Destapes, from which a mischievous blend of political power and yellow journalism emerges in the narrative.

Early on, Enrique Cárdenas and his wife, Marisa, lead a comfortable life together while sharing a close friendship with Luciano Casabellas, a respected attorney who is married to Chabela, Marisa’s best friend. At the time, Peru is threatened by terrorism and rampant political violence; so much so that Marisa and Chabela are unexpectedly forced to spend the night together because of a government curfew, an occasion that allows their unspoken desires to flourish. Soon thereafter, Rolando Garro pays a visit to Cárdenas and, after a tense conversation, gives him a series of photographs of an orgy in which Cárdenas participated years ago. Garro later asks Cárdenas for $100,000 in order to keep Destapes running while also offering to become a business partner at the tabloid; and while he is fully aware of Garro’s veiled extortion, Cárdenas refuses any collaboration and throws the journalist out of his office.

A week later, Cárdenas’s photographs are published. As the scandal grows and Cárdenas tries to repair his personal image, Garro is found dead. At this point, La Retaquita, Garro’s closest collaborator at the weekly, accuses Cárdenas of killing Garro to honor the memory of her boss. Cárdenas is arrested but later released on bail. As tensions rise, the true wheels of power are revealed in this fast-paced narrative: La Retaquita is arrested and brought before “El Doctor” (or Vladimiro Montesinos, Fujimori’s head of intelligence). He tells her that it was he who ordered Garro’s death and offers her a generous salary if she is willing to become the new editor of Destapes. In turn, she must blindly follow his orders and publish stories on political opponents he wishes to discredit. A tough and feisty woman despite her small height, La Retaquita at first agrees to work for El Doctor. But as she learns of Montesinos’s dark ways to destroy the honor of individuals who oppose Fujimori’s regime, she unexpectedly turns against him and publishes a final issue of Destapes denouncing Montesinos’s evil doings.

While Vargas Llosa effectively uses a counterpoint technique to tell the two stories that make up Cinco esquinas, the text does not display the great narrative dexterity for which the Peruvian writer became known for early in his career; moreover, while there are a number of interesting characters in the novel, at times the story seems to beg for more fully developed and psychologically dense personalities in some of them, including La Retaquita. Nevertheless, this book is in line with some of the most important themes found in Vargas Llosa’s best fiction: political oppression and moral decay, the role of journalism in society, social disparity in Peruvian society, individual heroism, and eroticism, to mention only a few. Such variety of topics, alongside a well-crafted, tense portrayal of one of the most obscure moments in recent Peruvian history, are among the novel’s best features and certainly make for an entertaining read.