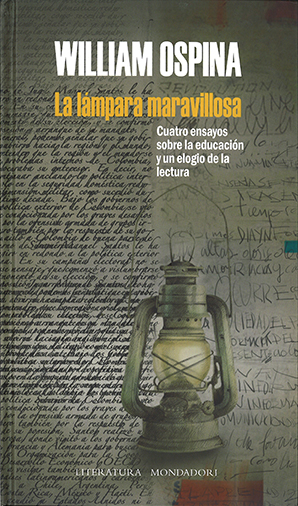 In an admirable page of La lámpara maravillosa: Cuatro ensayos sobre la educación y un elogio a la lectura (The marvelous lamp: Four essays about education and a tribute to the act of reading), Colombian William Ospina (b. 1954) writes: “Of course it is possible to live without books. However, we expose ourselves to the danger that the worst of the world will take possession of us: greed, rush, turmoil, anger, and above all boredom.” It is without a doubt that in a world without books, our life experiences and visions diminish. However, the problem that Ospina analyzes in this short but meaningful essay collection is even deeper: we also live in a world in which education has deteriorated to an unbearable degree.

The book is divided into four sections and a final essay. In the first section, Ospina asks himself what is it that we really learn, and he analyzes how a faulty education often damages our curiosity toward what needs to be questioned in the world. But the crisis of today’s education is not a mystery. The author observes that both the media and the market economy, one that favors cost over real value, make things even worse.

In the second section, entitled “Letter to the unknown mentor,” Ospina explains the importance of teachers in today’s society. The author states that education “does not mean so much to fulfill ourselves with certainties, but to guide and nourish our quests.” To learn is not to reproduce complex scientific formulas with precision or to repeat long paragraphs by heart about this or that event. To learn is a journey and a test in which we confirm our desire to abandon barbarism and obscurity.

In the third and fourth sections, Ospina analyzes the importance of language, not only as a means toward education but as the way to acquire a personal style in order to become unique beings with respect to others. In this context, the author refers to the pre-Socratic philosophers, who thought with their bodies, by walking, by connecting with the physical reality that surrounded them.

It is noteworthy that, in an essay written by a poet, someone like Steve Jobs is highlighted. Ospina states how the creator of Apple was always a man who preferred “intuition over discipline, vocation over imposed knowledge . . . the uncertainty of trying out new things over the certainty of success.” This means that success doesn’t only arise from efficacy and persistence; sometimes humanity’s highest achievements come from the adventure of someone who understood that in order to create something new and beautiful, it was also necessary to close one’s eyes and imagine what did not yet exist.

Ospina’s book ends with a beautiful tribute to the act of reading, which is also, indirectly, in praise of human imagination. However, the act of reading is not only that. Books “are not only imagination, they are also memory and thought, knowledge and song.” This means they are tools of aesthetic reflection that allow us to experience what will never be a part of our lives, to know other epochs and other people, to know how others feel, live, and think. The act of reading is a way to understand and love the world. For this reason, Ospina asks himself if it would be possible for us to renounce the gift that books contain, if we can really renounce the possibility of being more complete, free, and imaginative human beings. “One of the inevitable experiences of life is loneliness, another one is friendship, and the other happiness. But in our relationship with books, these three merge together.” The totality that is found in books is for Ospina like a marvelous lamp. It is important to rub it to understand what is hidden inside.