Love Is Power, or Something Like That by A. Igoni Barrett 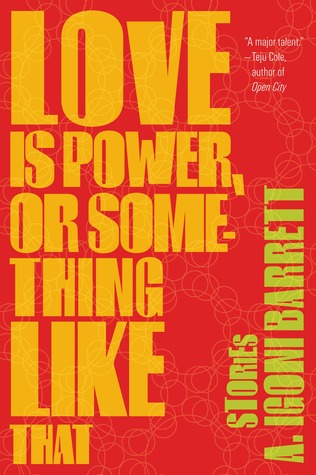 The final words of Nigerian author A. Igoni Barrett’s debut collection of short stories are “love does not mean marriage, a baby, forever. Love means you make me happy until you don’t.” How readers react to such sentiments may determine how they regard this book. The egoism, cruelty, and cynicism expressed here fittingly bring to a close a book that strives to capture an edgy, dangerous, volatile society struggling under corruption and, frequently, disregard for the well-being of other people. Barrett interjects violence throughout his stories—a boy hurls a stone into the head of a “madwoman,” a police officer remembers breaking his wife’s arm in a drunken rage, armed thugs prepare to rape and murder members of a family. Whether such acts are prevalent in Lagos (the setting of most of the stories), Barrett could do more to convey why he wants to write about them. Too frequently his stories lack self-reflection or insight into what makes his characters act the way they do. After the narrator of a story has sex with a woman introduced to him by Babasegun, a recent acquaintance, he remarks that the woman “was everything I wanted—especially with the knowledge that the first time was the last. My only regret was that I couldn’t chat about it afterward with Babasegun over a cold bottle of Trophy.” Barrett’s narrative technique offers no alternative to this callous, exploitative perspective; the reason for representing such a dispiriting point of view remains unclear.

The best story in the collection, “Godspeed and Perpetua,” happens to be the longest. This suggests that Barrett is at his best when he allows himself to move from caricature, a problem that plagues other stories, to more fully developed characters. In “Godspeed and Perpetua,” Barrett carefully portrays complicated family dynamics, the clash between faith and skepticism, tensions between wealthy civil servants and poor domestic servants, and the breakdown of some formerly colonial societies. Barrett takes the time to show his readers how Perpetua, disappointed in her marriage to a wealthy, older man, makes sense of her position: “Three years of marriage had given her the confidence to lower her regard for the housemaid. She accepted that Tene, who had two lovers in the city and a fiancé in the village, was the more experienced woman. But she, Perpetua, was educated; Tene was not. She was married; Tene was not. She had a child; Tene did not. And, most important, she was in touch with God, and Tene, because of her stubbornness, her stealing, her lies, was going to hell.” A passage such as this—focused, concise, balanced, and invested in the human quality rather than the sketches of drunken mothers, sexist men, and corrupt officials—shows the promise and strength in Barrett’s writing.