One Lark, One Horse: Poems by Michael Hofmann 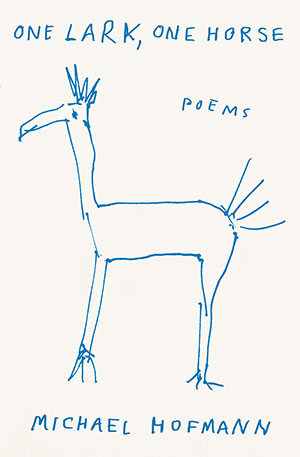 One Lark, One Horse takes its title from an anecdote that poet Michael Hofmann supplies in the front matter of the book. Not to steal the punch line, but the story is a joke, and it illuminates the poems in this collection.

Many poems here address aging or death. “Lindsay Garbutt,” a prose monologue and the first poem in the book, marks a man’s passage into middle age by the many pairs of reading glasses that he “variously use[s] and doesn’t use.” The speaker resents having to wear them because “they make the rest of the room disappear,” but more importantly, they mark a separation between himself as he is now and “the boy [he was] who saw the buffalo a mile away.”

The poem “LV” (the roman numerals for fifty-five) describes “The luncheon voucher years // The years of re-reading (at arm’s length) // The years of standing in elevators . . . feeling and looking looking like leathered frizz.” In refrains and pointed examples, “LV” rails against the many erosions of dignity that come with an aging body and expresses the fear (in these “years of no impressions and little memory”) about one’s mind going next. (Despite the worry about declining faculties, the observations in these poems remain sharp.)

Hofmann deals savagely with dysfunctional governments in poems such as “Silly Season, 2015” and “Midterms”; he skewers the American university system in “Higher Learning” (“We monetize the university. / Raid the pension fund, lease out the classrooms . . . / We boost distance learning. Streaming lectures. Log on and goof off.”); and deflates internet culture in “Less Truth” and other poems. Even the longer work “Letter from Australia” is less of an actual epistle and more of an international survey of errors committed by the United Kingdom and the United States.

Whether he is writing about aging, politics, or love, Hofmann uses language playfully, which make the poems of One Lark, One Horse a pleasure to read out loud. Hofmann’s own “Portrait d’une Femme” is an example. Rather than a portrait of a particular person, I find it to be a portrait de l’époque, a caricature of our internet-fueled, celebrity-obsessed culture. There’s a levity to it that saves the poem from being merely curmudgeonly: Hofmann writes, “The venomous articulation with its trademark solecisms / (naïve to wonder how anyone with a Cambridge degree in it / could hurt the language like you).” Of course, poets often break language in many ways to suit their purposes, and one need look no further than “see something say something” later in the collection for an example. Hofmann free-associates on the idea of national security (or security theater) without punctuation, syntax, or even word integrity, shaping the poem into a blocky bar code of nouns like so many data points and digital fingerprints. It is a poem that begs to be chanted.

Though many poems express frustration with the world, One Lark, One Horse is not a middle-aged jeremiad. The collection is wide-ranging in subjects, affects, and styles. Quite a few poems will appeal most to readers who know such names as W. H. Auden, Gottfried Benn, or Ezra Pound, but others, such as “Before she met me” and “In Western Mass.”, are universal and moving. “In Western Mass.” opens with “What do I remember of those strange episodic parts of my life. / What they nowadays call outliers. Someone put them in brackets. / (Who put them in brackets? I wanted them to go on.) // A dwindling fall, pumpkins, marriage, winter.” The examples that fill this poem are precise but not private, and in these images is a connection, a feeling of useful nostalgia that should open us up to the real and beautiful experiences in our own lives.

Ultimately, like the title suggests, the collection is about proportions—the small, incredibly valuable events that make the rest of it worth living.