A Down Home Meal for These Difficult Times by Meron Hadero 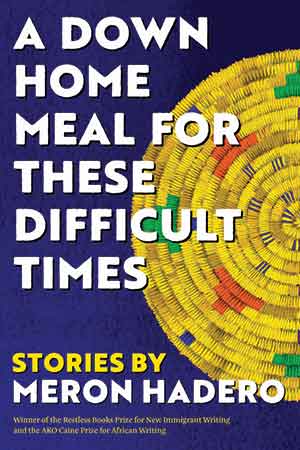 “HOME” CAN BE hard to pin down when you’re uprooted from two continents. Family, friendships, and even one’s own identity scatter like the windswept seeds of a dandelion. Meron Hadero’s A Down Home Meal for These Difficult Times is a mosaic of the disarray, displacement, and resolve of her Ethiopian and Ethiopian American characters.

The experiences Hadero captures vary from children and political bloggers to unlikely connections and one-sided mentorships. Yet every piece of dialogue is organic, her prose reflecting the cadence and intimacy of a conversation between two long-lost companions. Though some of her short stories speak to a specific feeling better than others—like the discomfort conjured from microaggressions in “Sinkholes”—they rarely feel redundant.

Some of Hadero’s most poignant selections dissect the strain of being pulled between two cultures. In the collection’s opener, “The Suitcase,” a woman is forced to mediate an argument with her extended family. Each is desperate to send a piece of Ethiopian tradition back to the US, and the chaos of their conflict sets a tone for the later installments to follow. Similarly, “Mekonnen aka Mack aka Huey Freakin’ Newton” follows a teen caught between his father, his diehard friends, and a very white New York. And “Swearing In, January 20, 2009” summons a generational hope that’s curtailed by agonizing hindsight.

Hadero also parses the nuances of relationships that seem beneficial but often aren’t. “The Street Sweep,” for instance, captures the pain of a once-in-a-lifetime connection fueled by hollow optimism and half-hearted generosity. In the “Medallion,” a life of an exchange student in LA veers off course as he becomes an apprentice for an aggressive, scheming cab driver. Both stories approach misplaced and mislabeled mentors, but Hadero demonstrates just how different, damaging, and oddly inspiring these encounters are.

Throughout the anthology, Hadero instills a sense of determination. “The Wall” features an unlikely bond between an Ethopian refugee fresh from Berlin and his elder friend. Her prose is succinct yet flowing as it traces the heartbreaking distance between the pair. The collection’s eponymous story is Hadero’s most moving tale, as two unlikely chefs carve their way through America and expand the definition of “American” itself through the charm of good old-fashioned sack lunches.

Some stories feel a bit out of place as they’re ordered here, but, at the same time, they offer a reprieve from an otherwise emotional journey. And this principle lies at the heart of Hadero’s writing; she reminds us that life itself is an often uncomfortable yet vibrant adventure.