Slaves for Peanuts: A Story of Conquest, Liberation, and a Crop That Changed History by Jori Lewis 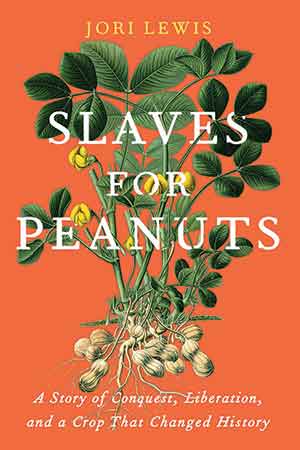 THE TEXTILE MILLS in England were key to the development of the Industrial Revolution. Commonly left out of the picture was the crucial component of cotton, cultivated by enslaved people in the southern United States. Peanuts, an international crop, has suffered even greater scholarly neglect, but Jori Lewis has done much to remedy this.

Comprised of fifty-five relatively brief chapters, Slaves for Peanuts is award-winning journalist Jori Lewis’s first book. She describes how the peanut we know and love today emerged ten thousand years ago in the lowlands of what is now Bolivia. It rose to prominence out of a rather sudden demand for soap in nineteenth-century Europe. Concurrent with the rise of industrialism was the appearance of a hygiene movement, and oils to make soap were wanting. Edging out palm oil and other options, the peanut grew in importance, especially from the 1840s forward.

Lewis’s story continues, not in the Americas, but in the westernmost parts of Africa, which are now called Senegal, Gambia, Guinea-Bissau, and Sierra Leone. Slaves for Peanuts is mainly set in the 1880s, with France as the region’s dominant colonial power. Peanuts had become a popular European import, less so in the US, where it had racist associations—as in only fit for Black people and, relatedly, the pejorative “working for peanuts.”

The book focuses on slavery throughout, and Lewis does a fine job of showing its variety, its ubiquity, and its persistence in West Africa as well as the variety of peanuts, with their many names in different regional locales. Some helpful maps are included for easy reference.

A good part of the narrative spotlights a few key individuals, especially the Protestant evangelist from Sierra Leone, Charles Taylor. The ups and downs of his career, including the ambiguities or aporias of his role as civilizer, play a pivotal role. He was indigenous and antislavery but also pulled toward European cultural norms. Native leader Lat Joor, schoolteacher Salimata Ndiaye, and French missionary Francisco Villager are among other figures whose impacts serve to flesh out Slaves for Peanuts's main themes.

Peanut agriculture was certainly important for West Africa, but Jori Lewis’s book deals more with slavery. There were islands of relative freedom or self-determination in cities like Freetown and Bethesda, and the colonial power, France, had to some extent abolished slavery as of 1848. But the plight and challenges of the newly freed were considerable.

In Charles Taylor, the book’s central figure, one recognizes the familiar pull of assimilation. Development, both physical (e.g., railroad expansion) and cultural, was resisted, with mixed results. Colonization brought inroads by civilization in general. And, somewhat ironically, European powers gained ground behind antislavery as a humanitarian rationale or foil. Using the antislavery stance, they were able to gain new Indigenous allies and further their control.

Jori Lewis conducted research in the archives of several countries and has given us a rich and very readable overview of people and peanuts in nineteenth-century West Africa.