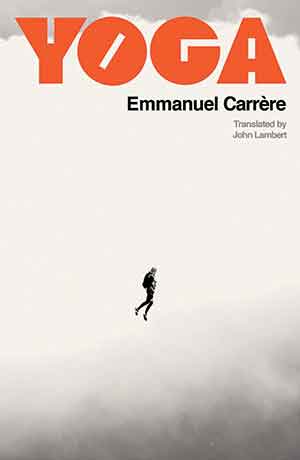 MANY PEOPLE HAVE written about mental crises—one thinks of Dostoevsky, Gogol, Stevenson, Waugh, Plath, and Styron, for instance—but in none of those accounts are the circumstances leading to those crises more closely examined than in Emmanuel Carrère’s new book, Yoga. Published in France in 2020 to considerable acclaim, it has now appeared in English in a superb translation by John Lambert, who has translated three of Carrère’s previous books. Yoga chronicles three years in Carrère’s life, from 2015 to 2019, a period punctuated by a very serious episode of depression, a four-month stay in a psychiatric hospital, and a diagnosis of bipolar-2 disorder.

Carrère tells us that his original intent was “to write an upbeat, subtle little book on yoga,” but disaster intervened. That disaster comes in a variety of shapes. There was the Charlie Hebdo terrorist attack in Paris, in which Carrère lost a friend. There was the refugee crisis consequent upon the war in Syria. And, during the writing of the book, there was the Covid-19 pandemic. Yet Carrère senses that his own disaster was not provoked by events external to himself but instead by a “powerful self-destructive streak” in his character. Indeed, one of the most interesting dimensions of this book hinges on the tension between the political and the personal, the outside and the inside, the world and the self.

In an effort to bring that sort of tension into harmony, Carrère attends a Vipassana yoga retreat, agreeing to obey a rule of silence for ten days and to meditate for ten hours on each of those days. Though that experience was cut short by events beyond his control, Carrère’s report of it is painstaking, closely grained, and animated by an unflagging sense of irony. He focuses particularly upon meditation, offering several different descriptions of that state and its purposes. He comes to wonder if meditation (which he has practiced for most of his adult life) is not just a narcissistic plaything for him; he frets that there is perhaps a contradiction, or a mutual incompatibility, between meditation and writing; he worries that storytelling, his stock-in-trade, is the opposite of meditation, insofar as one function of the latter is that it “aims to help you stop telling stories.”

In all this speculation, Carrère is clearly grappling with his ego, which he admits is considerable, even “despotic.” Some of the claims of that ego are easy to understand. One of the reasons that Carrère writes, he remarks, is to achieve fame and to make other people admire him. His last four books, all of them “big” ones, have met with a great deal of success in France, yet he tells us that he has always wanted more recognition in the anglophone world than he has thus far achieved. Other demands of his ego are more complex. Carrère recognizes, for example, that he is often aggressive with regard to himself. He senses, more disturbingly, that his self is double, and that those two parts are enemies.

His book reflects that duplicity. On one hand, Carrère’s narrative presents itself as fairly transparent and matter-of-fact; on the other hand, one notes moments of strategic opacity that Carrère constructs and cultivates with a great deal of attention. Most of Yoga presents itself as confession, as one might expect from a writer who has built his reputation on largely autobiographical nonfiction. Yet one of the confessions that Carrère makes is that certain elements of fiction are to be found in this book. The term autofiction is a familiar one, of course, and it seems readily available in this case, especially in view of the fact that precursor figures in French literature like Alain Robbe-Grillet, Marguerite Duras, and Serge Doubrovsky did so much to set the terms for that genre. Nevertheless, I suspect that something else is going on here. Carrère describes his own version of literature as “the place where you don’t lie,” yet he also admits that it is impossible to write without inventing things. He further remarks that, while he can be as frank and honest as he wishes when he is speaking about himself, it behooves him to exercise a great deal more tact when it is a question of someone else. He admits toward the end of the book that one of the people of whom he has spoken is mostly fictional, modeled on a real person in the first instance, but largely invented since then. As soon as one begins to massage the real for one’s own purposes, he concludes, “fiction takes over.”

In other words, the story comes with its own demands. One of the reasons for Carrère’s crisis is that he feels he no longer possesses a story. At the same time, he feels that he no longer has immediate contact with his experience, granted his impulse to formulate it in words before he can recognize it. But the very depth of his depression beggars words: in a very real sense, it cannot be told. That helps to explain the plurality of narration in Yoga. Rather than one uninterrupted account, Carrère gives us several: the story of his yoga retreat; that of the Charlie Hebdo attack and its aftermath; the tale of his depression and hospitalization; a description of his stay on the Greek island of Leros and his work with young refugees there; a moving elegy for his longtime friend and publisher, Paul Otchakovsky-Laurens, and so forth. Those stories comment upon one another in intriguing ways, and they put each other starkly into question, in certain respects, as well. Quite apart from the tone of confession that this book puts on display, it is the plurivocal quality of Yoga that is its most striking feature, and more especially the way in which one story comes to say what another cannot.