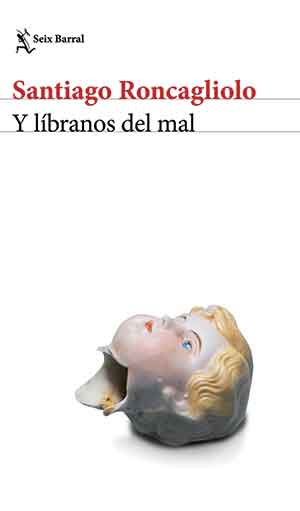 In Y LÍBRANOS DEL MAL, Santiago Roncagliolo’s latest novel, the Peruvian author and winner of the prestigious Premio Alfaguara portrays a fictionalized version of the widely publicized scandals of Sodalicio, a Catholic community in the Andean country. In this novel, unlike other published accounts, Roncagliolo explores an innovative point of view, that of Jimmy, a college-aged young man who doesn’t know of his father’s involvement in that faith community. Through Jimmy, Roncagliolo explores the deeply rooted religious beliefs that are perpetuated from one generation to the next.

Roncagliolo’s novel presents at least two different chronologies. The first features Jimmy, who was born to Peruvian immigrants and raised in the United States. The second is the story of Jimmy’s father, Sebastián, which is unveiled while Jimmy cares for his ailing grandmother, Tita, in a well-off neighborhood in Lima. Jimmy learns about Sebastián’s past and discovers multiple testimonies that “collapse[s] the past into the present, making it seem or feel as if it were more ‘real’ and ‘present’ than contemporary circumstances” (LaCapra, Writing History, Writing Trauma). By naming evils from the past and bringing them into the present, Roncagliolo empowers those who, as in Y líbranos del mal, have experienced abuse and violence at the hands of authoritative institutions.

Unsurprisingly, however, this is a novel in which circumstances are never entirely clear, nor do they need to be in order to understand the events. This ambiguity permeates the novel in its entirety and reflects the lack of trust, essential to the national character, and an acquiescent personality, key to understanding many Peruvians. Even though Roncagliolo resides in Spain, he accurately captures elements of the Peruvian worldview in the context of a very relevant institution in Latin American society: a traditional, Catholic family.

As in previous novels, Roncagliolo reflects on ignominious portions of Peruvian history. In Red April (2006), Roncagliolo criticized the actions that the government of Alberto Fujimori took against the terrorist group Sendero Luminoso. The prequel, La pena máxima (2014), is set in a soccer-filled Lima, crowded with fans that supported the national team in the 1978 World Cup. In the background, however, duplicitous characters swarm the streets of the capital because they are interested in eliminating all communist threats.

Y líbranos del mal sparked my desire to learn more about contemporary Peruvian history, particularly the historic events that inform this work of fiction. Unlike Mitad monjes, mitad soldados, by Pedro Salinas, which gathers testimonies from the victims, Roncagliolo’s novel explores the aftereffects of growing up in a society where the Catholic church occupies, indisputably, a very important place.