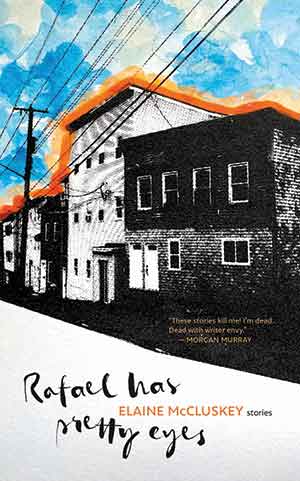 THE EPIGRAPH TO Elaine McCluskey’s fourth collection of stories is drawn from her story “Hope”: “Life is just one extended series of anecdotes strung together until they kill you.” Her stories and two novels consistently challenge readers’ expectations; she reframes narratives, with characters that other writers relegate to secondary status occupying center stage, and deftly navigates the terrain between defeat and determination.

Hope is “obsessed with avoiding the superficial, believing that everything good, salient, and worth preserving lived below it. Below the obvious.” Like Hope, McCluskey peels back the layers. Readers meet Brian in “It’s Your Money,” for instance, “two hours into his shift . . . where he makes fifteen dollars an hour, which buys one bottle of Pinot Grigio poured into a Thermos under his desk.” The details of Brian’s working life build credibility and arouse curiosity, but McCluskey develops his character via his observations about the payday loan business’s clientele, too. Subtly but strategically, the reader’s understanding accumulates via layered anecdotes: readers care because Brian cares, and Brian cares because McCluskey cares.

“People here are no different than people anywhere else,” although McCluskey focuses on “the liars, the betrayers, and the trifling ne’er-do-wells who never experience the ephemeral joy of good intentions” (from “Skunk Boy”). A character in “Let It Go” feels “sour drunk and stupid,” and one in “The Gates of Heaven” seems to be “a one-woman atmospheric condition.” The bulk of “We Were Lucky” is “things . . . never talked about . . . avoided,” and, throughout, readers study the “liner notes” of characters’ lives (from “Little Green Men”).

Aspects of this collection speak to McCluskey’s Atlantic Canadian life, including her native Nova Scotia (where Dartmouth is the City of Lakes and Spryfield is the home of the real-life Trailer Park Boys), the nearby maritime province of Prince Edward Island (where in “Is That All You Got?” the CBC reports on “a woman who kept a snowball in her freezer for fifteen years”), as well as specific Canadian references like the television series Little Mosque on the Prairie.

At the heart of McCluskey’s stories are “underdogs” and “people whom society decides have no business reaching for greatness, no business upsetting the natural order of things” (from “Remember”). In Rafael Has Pretty Eyes, McCluskey proves that she knows how to string it all together, and she reminds us stories can bring us back to life.