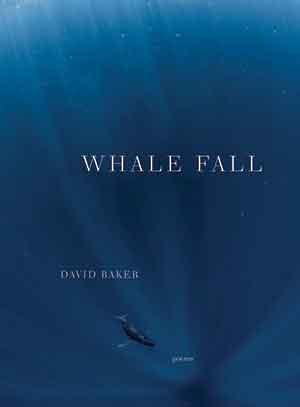 JOSEPH BRODSKY SAID somewhere that “poetry is what every language hopes to become.” This means that poetry is aspirational at the level of language, which certainly beats poetry that is nonaspirational in its language, as so much contemporary poetry seems to be, relying far too much on approval gained by the pedigree of its political or sociological stance. These can be tiresome times asserting more good poetry than there is.

David Baker’s newest collection of poetry is, thankfully, aspirational in a way that seeks a wide audience with its concerns and generosity of thought and does not speak narrowly from the precinct of identity and difference. That said, it suffers at times from a too-inclusive notion of poetic form—i.e., the outright bountiful inclusion of textbook prose that is meant to enlarge its effort but instead drags down its effect.

The title poem, “Whale Fall,” spanning a full fifteen pages, serves as example. In it, we discover incredibly beautiful passages in which image, rhythm, and rhyme together achieve a natural-sounding and deeply poetic voice. For example, four to five pages into the poem, we read: “right cuspid, gum swollen, puffed as a pea— / two days before the viral fire, the toxic sea.” Then “Cottonwood seeds. Gnat’s wings in the sunlight. / Whirl of dust motes in the haze of still light. // If it were so easy as to drift down. / If it were so easy as getting up again. // Little bug, little serpent. The air slows / with summer thickness when you fly away. // And the feeder bobs there like a red buoy / on the green waters of a distant bay.” We have language not only using image, metaphor, rhythm, internal rhyme, and economy but also clarity. Not bad.

Unfortunately, only about 25 percent of the poem is recognizably poetic: huge portions of it are straightforward news reports, paragraph-long quotations from Wikipedia, long lists of data included only for information, and even a chemical formula replete with a lesson explaining it (e.g., “r is the radius of each cell; G is the shearing rate,” etc.). Some readers may enjoy huge quantities of mere data and information dumped into a poem in language that is unprocessed by poetic sensibility; this reader does not. We don’t need a “village explainer” as Gertrude Stein once called Ezra Pound. “Whale Fall” will be a much better poem a dozen or so revisions hence.

Though certainly Baker’s central focus and gambit, “Whale Fall” is not the best poem in the book; there are some very fine and better poems, the best of which may be the elegy for Stanley Plumly titled “Turner’s Clouds for Plumly.” Here, the voice, intimate and nondemonstrative, saturates in the moments it describes, tender and restrained. “Keats knew ‘the colour. I cannot be deceived . . . // that drop is my death warrant;—I must die.’ / Stanley said his started at a distance / five hundred and twenty light-years away / and fell as stardust into his sleeping mouth. / We live in one time but think in another.”

Other poems, however, like “A Portrait of My Father,” retreat into cryptic personal narrative in which too much connective tissue is withheld and the voice withdraws to places the reader can’t follow, nor is even enticed to follow by way of the allure of language and image as we find in Wallace Stevens’s more difficult poems (e.g., “An Ordinary Evening in New Haven”). Still yet other poems seem intent to “witness” for the mere journalistic sense of witness, but we wonder why. Readers expect at least an implicit reason for a focus, the way a camera frames something specific and says, “Look here. Look here especially.” After all, we all have our own 24/7 journalistic recording that we must edit; we expect others to do the same, especially for the occasion of a poem.

In short, Whale Fall is successful in ways and places but has the feel of a book rushed into print that might have better cellared for a time to purify and shed some long-chained tannins.