Heritage: A Novel by Miguel Bonnefoy 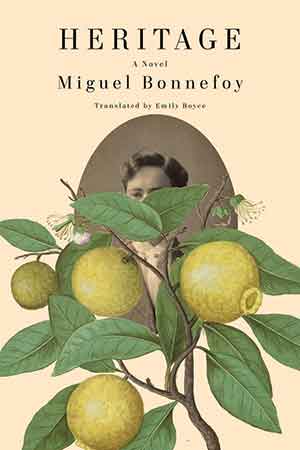 MIGUEL BONNEFOY FREEFALLS into his strangely alluring new novel, Heritage, which makes a desperate attempt to understand the internal forces that allow one to move forward from a life that is withering. Bonnefoy isn’t bothered by literary restrictions of any kind and seems to be something of a wild spirit accustomed to listening to his own drumbeats. He wanders into the secret in-between places of the human psyche, unafraid of what he might find. That is where he uncovers narrative gold. This novel is loosely based on his family. His Chilean father was tortured by Pinochet and fled to France, where Bonnefoy was raised in a loving home surrounded by books. But it seems the ghosts that haunted his father permeated Bonnefoy’s soul as well, and although he is only thirty-six, he writes with the battered sensitivity of a much older man. His intense third-person narrative voice takes on a wizardlike persona that hypnotizes the reader throughout.

We aren’t sure at first what Bonnefoy wants to tell us. But it soon becomes apparent. He demonstrates repeatedly throughout the novel how a person can transform themselves into someone else simply by surrendering to an obsession that grabs them as nothing has before. A wounded man may remain wounded, but in Bonnefoy’s reconfigurations, he can straddle his woundedness more gracefully. But these kinds of miraculous makeovers require a willingness to be possessed by an idea, or a dream, or another person’s love.

We meet Lonsonier while he is boarding a ship for California from Jura, France, with the few healthy vines he has left from his winemaking vineyard that has been ravaged by the phylloxera virus. Lonsonier is destitute and plans to replant these healthy vines in California. He gets sick onboard and is forced to depart the ship in Chile. He recovers and marries a daughter of the Lamarthe family, who also fled France and make their living selling umbrellas. Lonsonier is enjoying his new life in a “drizzly land sandwiched between mountain and ocean, where it was said that in some regions rain can fall for half a century.” He’s struck by the stark beauty of Chile and its unworldly landscape; and he is already able to decipher the “new writing of the southern skies, with its fugitive star algebra, and [understand] that he [has] settled in another world of pumas and araucarias, a primeval world peopled with stone giants, willows, and condors.”

Yet France remains part of him; it is the language he still uses when speaking to his children. When World War I beckons, his son Lazare goes to fight for his father’s homeland and comes home a destroyed shell of himself. Desperate attempts are made to resuscitate his life-force, but he remains unchanged until a girl he meets in the woods somehow captures what is left inside his broken heart. Lazare gives himself over to her completely, abandoning his well-being to her tender touch. We come to see how his willingness to do so saves him.

Bonnefoy shows us this pattern again and again. Someone destined for death, or a life not worth living, is remarkably saved by an accidental obsession that changes the trajectory of their life. Lazare and his wife have a daughter, Margot, who worries them from the get-go. She is listless, and no one seems to be able to light up her eyes. One day her mother has a healer come to the house, who talks endlessly about the wonders of levitation and fascinates the child with the notion of flight. From that point onward, Margot became a serious young woman who serves as a wartime pilot, again for France, in the next world war. The healer had no idea that it was his words about levitation that turned on the switch in her brain which created the desire to live a grand life. He was just trying to entertain a sad little girl. But her face seemed to change shape immediately after his appearance, and an energized passion filled her face. She set about learning all she could about flying and attempted, with a new friend, to build her own plane while they talked about Amelia Earhart’s transatlantic flight.

There’s a bristling romanticism behind many of Bonnefoy’s tales about tortured souls who manage to find some sliver of solace amidst the chaos. Bonnefoy masterfully describes their desperation as well as their deepest yearnings. He writes like a man possessed, and one suspects he probably is, and that is why all his characters seem to speak to us in a voice that carries his essence.