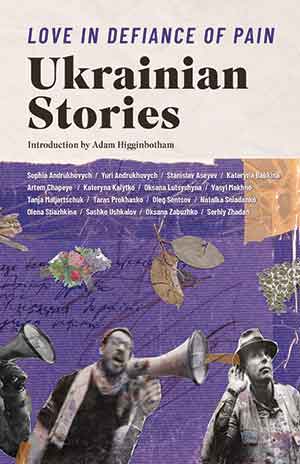 WELL BEFORE THE current Russian invasion provided a global spotlight on Ukraine, contemporary Ukrainian writers were forging their own literary territories that autonomously identify them and their country. Love in Defiance of Pain: Ukrainian Stories handsomely showcases many of the best Ukrainian writers (in English translations) with stories that are not about the current war but nevertheless exhibit Ukrainians confronting universal themes of life and death, love and betrayal, war and peace.

This is a fiction anthology, but the sixteen writers in the collection are also well-known poets, essayists, filmmakers, activists, and now soldiers. Among them is filmmaker and writer Oleg Sentsov, who was originally imprisoned by the Russians for speaking out against Crimea’s annexation in 2014 and is currently in the Ukrainian army. His story, “Grandma,” is a deft character analysis of a poor, burdensome husk of an older woman whom nobody likes, least of all her family—a sad narrative that is often true of the babysi (grandmothers).

Stanislav Aseyev was kidnapped and imprisoned in Donetsk in 2014. His moving war story “The Bell” is about a returning soldier haunted by the sound of a bell that he needs to confront. Olena Stiazhkina’s novel excerpt features a man rescuing the unclaimed body of his lover’s husband during the earlier Russian occupation in eastern Ukraine.

Certainly, love is another major theme. Oksana Zabuzhko and Natalka Sniadanko both write about girlhood crushes and ultimate betrayals. Whimsy underscores love in fables by Kateryna Kalytko and Sophia Andrukhovych, while Artem Chapeye’s “The Ukraine” (published recently in the New Yorker) is a poignant reminiscence of a couple’s last travels together.

Ukrainians in other countries find themselves in Vasyl Makhno’s “Brooklyn, Forty-Second Street,” about a fake green-card marriage, and Tanja Maljartschuk’s “Frogs in the Sea,” in which an undocumented Ukrainian befriends a dementia-stricken woman in Germany.

Humor is a welcome counterbalance in stories like Sashko Ushkalov’s “Panda,” about the narrator’s reincarnation as a panda; Yuri Andrukhovych’s treatise on a sixteenth-century scoundrel; and Serhiy Zhadan’s send-up of inept businessmen establishing the first gay bar in Ukraine.

Stories by Kateryna Babkina, Oksana Lutsyshyna, and Taras Prokhasko round out this outstanding and significant collection of Ukrainian fiction. Proceeds from the sale of this collection will be donated to humanitarian efforts in Ukraine.