Dream in a Suitcase: The Story of an Immigrant Life by Domnica Radulescu 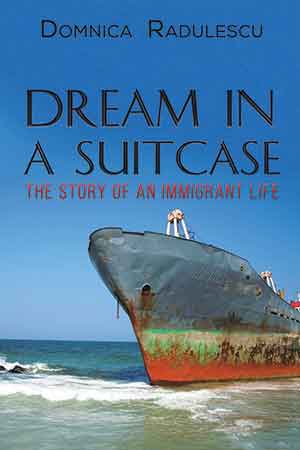 I REREAD Domnica Radulescu’s memoir, Dream in a Suitcase, after I returned from a weekend trip to Slovakia. There, in a train station in Bratislava where I was waiting for my ride home, children were playing on old mattresses that served as an improvised indoor playground. A spirited little girl whose face was blossoming with a wide smile reminded me of my own energetic three-year-old, waiting for me to meet him in Romania, where he was spending the summer at his grandparents’ house. But unlike my own child, who is a second-generation Romanian Iranian American born and living in Oklahoma, this little human was a Ukrainian refugee, living in a makeshift shelter in a train station in Bratislava.

Overwhelmed by grief, I returned to Radulescu’s memoir because this book explores the trauma of exile as experienced by a young person. And what can be more satisfying a read than this memoir, when I have been feeling so dreadfully helpless in the face of the cruel and tyrannical war waged by Russia in Ukraine, only a short distance away from my parents’ house in Romania, which received scores of terrified refugees, most of whom were women and children?

Radulescu’s memoir unfolds a stunning life story, masking the keen of grief behind a veneer of sarcasm and dry humor. Her own exile from Romania in the 1980s had been inspired by a terror not unlike the one we see devastating Ukraine today: a Soviet-inspired authoritarian communist regime that targeted women specifically in ways that removed their autonomy over their bodies and their lives. In fact, in an article written for the Boston Review, Ileana Nachescu writes that in the context of Russia’s cruel war in Ukraine, “regional solidarities of the postsocialist space are emerging again.” She offers some examples: “Pussy Riot recently tweeted a video of Kharkiv’s bombed center, recalling that the Center for Gender Studies was the place where they first read feminist books. Ukrainian refugees are finding shelter in Moldova, Romania, Slovakia, Hungary, and Poland, the first two—the ones with the longest borders with Ukraine—considered the poorest countries in Europe.” And although it was written a year before the tragedy in eastern Europe, I understand Radulescu’s memoir as another act of solidarity with women and migrants across the postsocialist region.

Radulescu’s book belongs to a lineage of grief-inspired memoirs that meld personal stories with a sharp social critique of racism, xenophobia, and inequity in the United States, such as From Borsch to Burgers, by Ruslana Westerlund; Once I Was You: A Memoir of Love and Hate in a Torn America, by Maria Hinojosa; The Ungrateful Refugee, by Dina Nayeri; or Beautiful Country, by Qian Julie Wang. In it, the reader accompanies the memoirist on a long and harrowing trip from Bucharest to Rome, then to Chicago, and finally to a small town in Virginia. This voyage parallels the writer’s psychological journey of becoming a woman in charge of her life and dreams. Radulescu left Romania as a teenager to reunite with her parents in hopes of seeking political asylum in the US. The horrors that inspired Radulescu’s family to escape communist Romania have been amply described by scholars such as Katherine Verdery, Gail Kligman, Dennis Deletant, Jill Massino, Irina Livezeanu, Maria Bucur, and many others. They include decades of terror and tyranny, isolation, acute poverty, inhumane conditions for children, for the poor, for the Roma minority, a strict surveillance of women’s reproduction, the mistrust of intellectuals, corruption, and state patriarchy, to mention a few.

Away from everything she knows, Radulescu is accompanied only by one small suitcase containing a handful of clothes and the manuscript of a story collection she manages to smuggle out of communist Romania, risking her life. The suitcase represents a vehicle of escape into a world where Radulescu can reclaim agency over her body and her mind. In the United States, she graduates with her PhD and obtains a tenure-track academic position in a small town in Virginia, where the adult Radulescu faces blatant misogyny, racism, and xenophobia, and where she feels as if she is always expected to explain herself, her accent, and her life choices. She is a single mother of two children by two different men, an academic teaching foreign languages in a space where most people only speak English, and a vocal feminist writer who advocates for a woman’s right to make their own choices regarding their bodies, their reproduction, and their sexual lives. Aided by determination and a small but strong support system comprised of family and friends, Radulescu manages to thrive and to live out all her dreams.

That Radulescu’s is a story of resilience does not prevent the author from gently reminding readers how longing for one’s birthplace and struggling to belong in the new “home” represent constant realities of life for all immigrants: “The difference is that now you own your little impetuous volcano of longing and remembrance. . . . You clean it out, you care for it, you watch it fill up again and wait patiently for its new irruptions. You travel around the world, you keep returning to that initial crater where you were born and grew up.” I think about the little girl in a train station in Bratislava. What will she long for? Where will home be for her? What are the dreams in her suitcase?